After an alliance of BC First Nations promised to block pipelines to the coast, Gitxsan negotiators announced a $7 million deal with oil giant Enbridge. 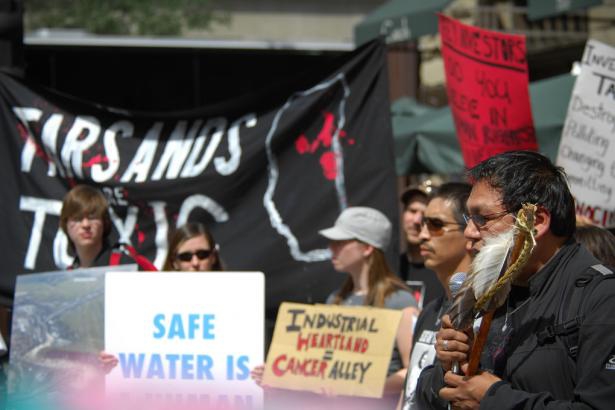 Aboriginal protesters from the Chipewyan Nation at an anti-Enbridge demonstration in 2008. Photo by ItzaFineDay.

Just a day after First Nations leaders across the province pledged to form an "unbreakable wall" in opposition to Enbridge's Northern Gateway pipeline, the Gitxsan Treaty Society's chief negotiator Elmer Derrick announced a new $7 million agreement with the oil company.

Last night at an anti-pipeline forum in Vancouver, Saik'uz Nation Chief Jackie Thomas expressed her confidence in the solidarity of Aboriginal communities all along the proposed pipeline route. She praised the efforts of the 130 signatories that have now endorsed the anti-pipeline Save the Fraser Declaration.

The Gitxsan announcement comes after another turning point in the pipeline controversy, as Alberta's Chipewyan Nation came out with a lawsuit against Enbridge for failing to meet the terms of their tar sands agreement.

News of the Gitxsan deal is no doubt a disappointment to the tar sands opposition, particularly at a time when many had started to feel like the "tides had turned".

VANCOUVER -- The controversial Northern Gateway pipeline that would ship Alberta's oilsands crude to the West Coast has won the support of a B.C. First Nation that controls some of the land the line would cross.

Chief Elmer Derrick says the hereditary chiefs of the Gitxsan (pronounced GIT'-san) have decided to partner with Enbridge Inc. (TSX:ENB) in the proposed $5.5-billion project/

The line would help increase oil exports to China and other Pacific Rim countries.

The pipeline has been opposed by several groups including several First Nations due to the potential risks of crude spills along the line or West Coast shipping lanes.

Derrick says the Gitxsan First Nation has concluded, however, that the pipeline can be built and operated safely.

The group says it expects its agreement with Enbridge will provide at least $7 million of net profit to the Gitxsan.