Activists say 80 per cent of BC is against the Kitimat pipeline project -- and for good reasons. 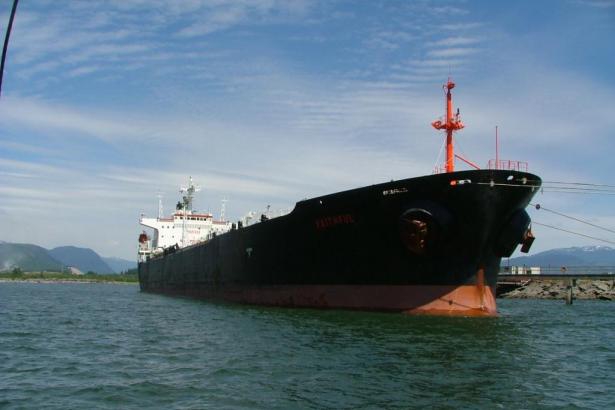 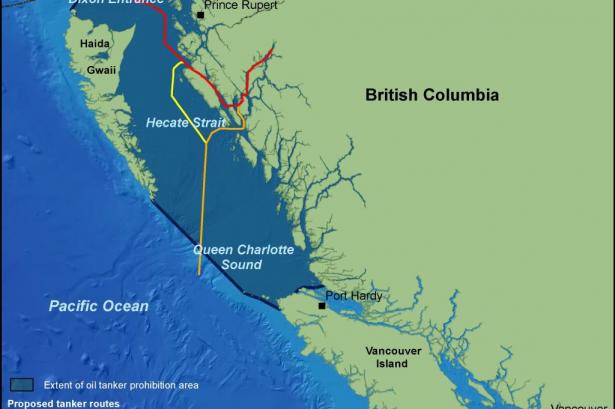 1) A tanker sits in the water along the coast of Northern British Columbia. 2) A map shows proposed Enbridge shipping routes. Images courtesy of the Living Oceans Society.

The report was a collaborative effort by three environmental groups – the Natural Resources Defense Council (NRDC), the Pembina Institute and BC’s Living Oceans Society – and it was endorsed by nine other BC organizations, including ForestEthics and Sierra Club BC.

“Our assertion is that the pipeline should not be built, and that the associated oil supertanker traffic should not be allowed. Globally we have cleaner energy choices than tar sands and the destruction that it leaves in its wake, from the extraction to the transportation,” said Susan Casey-Lefkowitz, international program director for the NRDC and one of the study’s authors.

“While the benefits of such a pipeline would be enjoyed by the major oil companies, the costs in the case of oil spills would be borne by British Columbia for decades to come.”

Titled “Pipeline and Tanker Trouble”, the report says Northern Gateway poses a serious threat to various wildlife habitats, BC salmon and to many First Nations communities who traditionally rely on the land. The possibility of spills and leaks was the basis for most arguments, particularly in the coastal waters around Kitimat, where supertankers would convene to transport oil from the pipeline to markets overseas.

“It’s really not a question of if a spill will happen, but when,” she said.

Terhune said the project would bring as many as 220 supertankers to the BC coast every year, each able to carry two million barrels of oil – almost eight times the amount spilled during the Exxon Valdez incident in Alaska.

The report argues that a spill from Northern Gateway tankers could be especially hazardous because the diluted bitumen being transported from the tar sands is much more difficult to clean up than other types of crude.

The assertion that bitumen is more corrosive and dangerous than other oil is central to many of the opposition’s arguments. But Enbridge spokesperson Todd Nogier said that people should look deeper into the issue for expert opinions.

He responded to fears of spills, insisting that the company is confident it can operate the Northern Gateway project with the “utmost safety”.

“If we didn’t have that confidence, then we wouldn’t undertake a project of this size and magnitude,” he said.

The authors of the report refer to an earlier Enbridge spill that occurred in July 2010, dumping over 20,000 barrels of oil in and around the Kalamazoo River in Michigan. The spill, which resulted from a leak in a nearby pipeline, has still not been completely cleaned up. A government study also revealed that many local residents had experienced detrimental health effects.

Nogier said Enbridge’s past experiences with spills like Michigan’s will be carefully considered in their safety efforts moving forward.

“That incident was a very humbling incident for us, and it is one that we want to ensure never happens again,” said Nogier.

Tar sands opposition focused on BC

The recent delay of TransCanada’s Keystone XL pipeline to the southern U.S. has generated renewed support for the Northern Gateway project as a way to find alternative markets for Canadian oil. At the recent APEC summit, Prime Minister Stephen Harper made it clear the country would “increase its efforts” to clear the path for energy exports to Asia.

With a government dedicated to pushing this project through, some have doubts that opposition efforts like this report will have enough of an impact. But groups and individuals working against the project say they will do “whatever it takes” in order to stop it.

Gerald Amos, member of the Haisla First Nation and leader of the Headwaters Initiative, said the 60 or more First Nations communities along the Fraser River are committed to “upholding ancestral laws” that prohibit oil pipelines and tanker traffic.

“If push comes to shove and this project is given the go-ahead, I’m prepared to do as others have done before me in our communities and stand on the line to prevent any machinery moving onto a site,” he said.

The report claims that 80 per cent of British Columbians are against pipeline projects that would bring supertankers to the coast, and according to the authors, there are few – if any – ways that the project could be adjusted to appease the related environmental, social and cultural concerns.