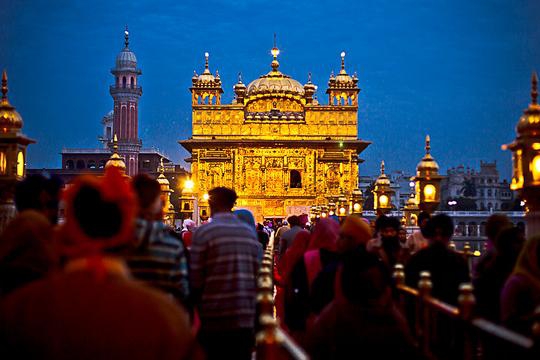 Photo of the Harmandir Sahib in Amritsar by Tomasz Wagner.

My ancestors originate from Punjab, which is the land of five rivers in northern India. Punjab has been consistently ranked as having the best quality of life, best infrastructure, lowest hunger level and best overall state in India for a number of years. It has been described as the “granary of India” because it produces much of the country’s cotton, wheat and rice. About 25 million people live in Punjab: 15 million Sikhs, 9 million Hindus and smaller populations of Muslims, Christians, Buddhists and Jains.

The Punjabi Sikhs are well known for their contribution to India’s military forces, as well as the historical role they played in battles for the British Empire. In fact, much of Punjab and northern India formed part of the sovereign Sikh Kingdom of Maharaja Ranjit Singh prior to British colonial rule.

The Punjabis are a mixed people. Along with the British, the Turks, Persian, Afghans and Greeks, among others, invaded northern India. The farthest extent of Alexander the Great’s empire was the Indus River—the Indus Valley and Vedic Civilizations flourished in northern India.

I am writing this article because I feel Punjab’s future lies in greater cooperation with India and its neighbours. Punjab should have greater autonomy over certain areas of its economy and resources, such as electricity and water, and it should be allowed to better develop its land, people and society.

India is a growing world power. It is a secular English-speaking democracy.  Punjab can position itself well and take advantage of this. It can develop transportation routes that link Delhi, Chandigarh, Amritsar, Lahore and Islamabad, which will facilitate trade and tourism. Already, the Golden Temple in Amritsar attracts more visitors every year than the famous Taj Mahal near Delhi.

Maybe Punjab can work out an autonomy agreement with the Government of India. I feel having the freedom and flexibility to take control of your own destiny can lead to mutually beneficial results for all parties involved. In a country as large as India, decentralization can lead to socio-economic and political peace and progress.

Scotland and Wales in the United Kingdom and Catalonia in Spain are classic examples of this kind of state within a state.  Even the Canadian and Australian federal systems are an example of decentralization working to create highly developed countries with a high standard of living.

Punjab and India are interdependent and always will be. The politicians in Delhi and Chandigarh need to work together to give Punjab the ability to reach an even higher level of development and to achieve its fullest potential.

An indivisible Quebec and Canada

Men who have sex with men outside of marriage

Peace in the holy land