Will this be what affordable living in Vancouver looks like in 2016? Where will you put your faith?

Waiting for the sales pitch at Wall Centre Central Park.

In the future, this block will be crowded with high-rise condo buildings. For now, though, it's home to a big white tent with music coming out of it. A queue of people snakes though the space. It's like an old-time revival tent, except with doughnuts. Do revivals have doughnuts? If not, they should. 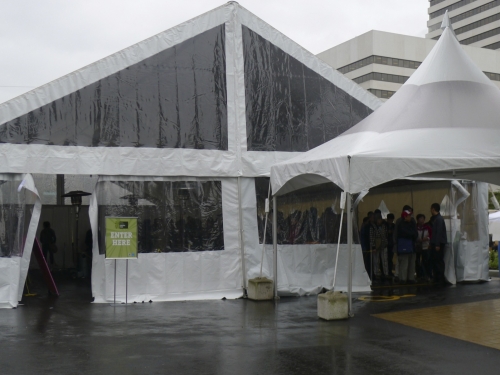 Questioning my own sanity, I join the back of the queue. It's Wall Centre Central Park's opening day. The project is being developed by Wall Financial Group and pitched by Rennie Marketing Solutions: I see those little square logos on each perky staffer's pullover. I make a mental note to steal one if I find one lying around, so I can sidestep this queue and get on with my life.

And I know all the games you play, 'cause I play them too

As I stew in the queue, I wonder why I even have to wait. Surely the Wall Centre team isn't anticipating a stampede. Is it because they're handing out $25 Metrotown gift cards to whomever gets there early? I don't even want a gift card: last time I was at Metrotown was to see the dinosaurs. Besides, I'm hardly early: the event started nearly two hours ago. Maybe the queue is to enforce a sense of urgency, getting you to make a quick decision in case all the apartments get snapped up. Like shopping on Black Friday.

Yeah, I'm calling BS on this queue. If it were based on how quickly visitors checked out the model units, we'd either be moving much faster, or not at all. This is what nightclubs do: a line of people waiting to get in is an advertisement that screams "in demand".

Is there real demand for high-rise condos? Overall, we know the answer to be "no". However, the lower end of the pricing scale is where the city's working inhabitants are going to look, and that's what Wall Centre is offering. Out of 623 units in this phase of the project, almost half are priced below $300,000.

Is that affordable? If you make over $42,000, your bank will probably allow you to take on the mortgage; let that be the answer to your question. A more definitive answer would be the queue in which I'm standing.

Someone ahead of me is throwing an empty coffee cup into the gas-cylinder container of the space heater. She somehow thinks that the pole with a burning flame at the top is a trash can. I'll never get these moments back.

Yes! I made it to the front of the queue. The chipper staffer guides me to... the next tent. Great. This is a matrioshka of makes-me-miserable. At the front of this second queue, a guy standing on the other side of the rope whips out a harmonica. His harmonica, my hangover: this here tent ain't big enough for the both of us. 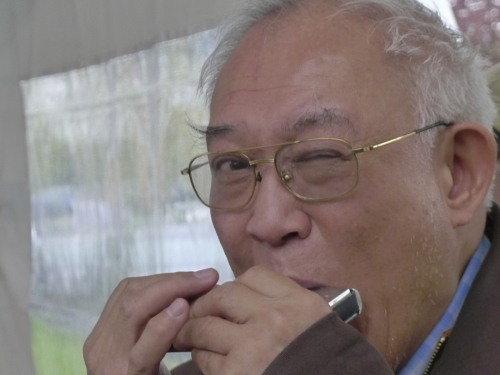 Who the hell serenades a condo queue with harmonica tunes on rainy Saturday mornings, anyway? Lian Seng Wen, as it turns out. I know nothing of his realty work, but I'll go on record as saying that he's a pretty good harmonica player.

I reach the front of the queue, and am rewarded with a form to fill out. I put my name down as Chuck Finley.