There's a real estate developer in Vancouver whose target market is people who can't afford to pay rent. Atira Women's Resource Society is thinking outside the box, with the help of some rather large boxes. Providing affordable accommodation to vulnerable citizens is also giving Vancouver better architecture. 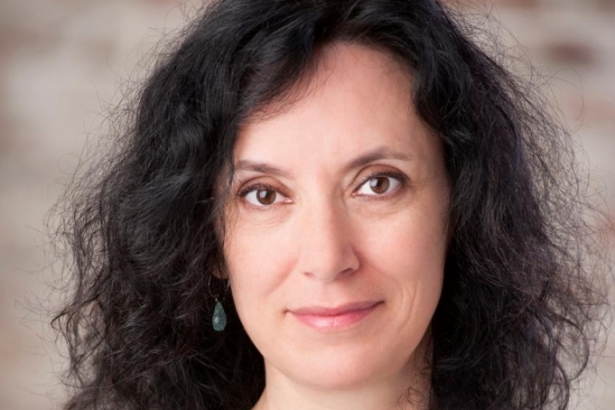 A perfect fit for Railtown

A grey-haired man in a shapeless brown coat, carrying a sticker-encrusted guitar, comes up behind a one-legged man in a wheelchair, claps his hand on the guy’s shoulder: “How are you, my brother?” The man in the wheelchair yells back, “Alive and well!”

Crossing Powell, a man walks past me, smiling through half of his teeth, “It’s great to see that yellow orb!” It’s a beautiful day on the Downtown Eastside.

I’m here to ogle the Imouto Container Housing Project, a deluxe apartment building made from shipping containers, brought to Vancouver by Atira Women’s Resource Society. Aside from fulfilling a deep need in our real estate environment, Atira and architect Barry McGinn are giving the vanilla architecture of Railtown the kick in the ass it so richly deserves. 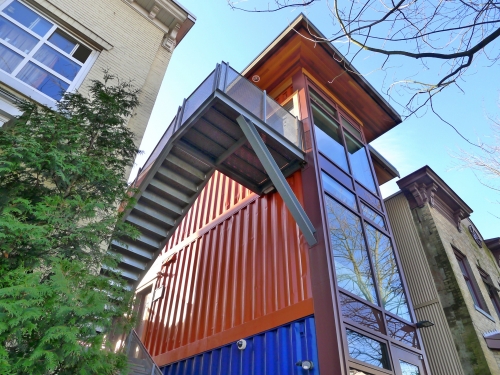 The geek in me exults at the genius of the structure: ready-made steel boxes, with proven capacities of 40 tons, assembled to create a beautiful little building. As for fitting in to its surroundings, there's nothing more Railtown than an upcycled shipping container. 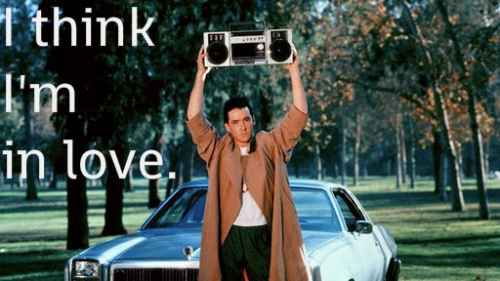 The first shipping container was loaded in 1956. It was an anomaly, and everyone involved had to bend over backwards to accommodate the angular object throughout its voyage. Fast-forward to today, and you cannot ship without a shipping container.

It turns out that the box itself isn’t the disruptive technology: the real leap forward was the implementation of that global system of cranes, trucks, tankers, and bar-code scanners which has revolutionized how we get plastic tchochkes from Point A to Point べ.

You can find shipping-container housing popping up all over the world, so perhaps in the near future a steel-crate house will become the norm instead of the exception, just like its globetrotting building blocks.

This phenomenon dovetails nicely with the budgets of groups such as Atira, who can save boatloads of cash by building with perfectly-sturdy materials that otherwise go to waste.

A concrete (and steel) mission

Atira Women's Resource Society formed in 1983 for the sole purpose of supporting women experiencing violence. Not to "raise awareness", not to "get people talking", but to dramatically improve the lives of as many abused women as possible. Their first housing units opened four years later.

It ain't easy, though, when your target market consists of people who have no money.

Some of the older nonprofits have enough cash flow to build market-rate housing, and use that income to then build social or non-market housing. Atira Women's Resource Society CEO Janice Abbott says, “We’re not that flush right now.”

At first, groups like Atira could buy real estate with government assistance. By 1992, there was a shift in how nonprofits could own property, and the trend was toward long-term lease agreements.

Looking at the big picture, this makes little sense, since non-profits aren’t able to generate any economic momentum on their non-market housing expenditures. In other words, these groups cannot really generate equity.

“One of Atira’s biggest struggles over the past 10-12 years when building housing was figuring out how to own it," notes Abbott; even still, that period saw Atira's largest growth spurt. (Abbott was named Ernst & Young's Social Entrepreneur of the Year in 2010, and was last year given the Denise Leblond Memorial Award.)

Abbott says, “I hope it’s going to shift back... obviously, as we pay down our mortgage, we can use the equity and any revenue we derive from those properties to plough back into building more housing and furthering our mission.”

Once owned, a property becomes an asset for helping those who need it 10, 15 years down the road; and you don’t have to be Nostradamus to predict a sustained need for housing within reach of those of us who work for a living.

“All the housing we build is driven by our mission," says Abbott. "Atira is an anti-violence organization, and we manifest our mission through housing. So, providing housing to women and children who have been affected by violence.”