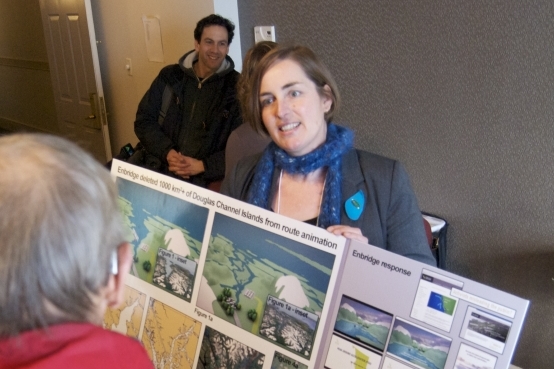 The final day of the Enbridge Joint Review Panel hearings in Victoria was short but tense, with presenters reduced to both anger and tears, and an apparent last-minute rule change.

Lori Waters, the scientific animator who “found” the 1,000 square kilometres of islands that were omitted from Enbridge's promotional video of the Northern Gateway pipeline, was one of the final presenters of the week.

She tried to show everyone in the room how it should look and all the steps involved, but was told upon entering the hearing room that she couldn’t show her images.

“They said at the last minute that I wasn’t allowed,” she said.

Before Waters began speaking, panel chair Sheila Leggett told her they were here to listen to presenters, not look at visual material.

Waters said afterward that she followed instructions for submitting a visual aid as laid out by the JRP.

“It means their procedural directives are actually false.”

Instead, Waters showed off her work and answered questions in the waiting room for about half a dozen speakers still around after giving their statements were interested. “I want the public to know about it and if [the panelists] don’t want to consider it, I can still get my points across,” she said.

She explained the process for creating such drawings. She said there’s no excuse for the discrepancies.

“What I’d like you to keep in mind when I speak about Enbridge work is that every part of an animation must be deliberately created."

Chris Paynter, who is involved in product design for the oceanographic industry, compared Enbridge’s risk assessment of one spill every 15,000 years to the kind of thinking that led to the Challenger space shuttle disaster. Reports completed after the crash, he said, revealed, “a systemic disconnect between NASA management and engineering.”

Reporting on safety tests for the shuttle didn’t include instances of trouble, or near-failure of the O-ring deemed responsible for the crash.

“What I believe we are seeing with the Enbridge proposal is exactly the same situation,” Paynter said. “We have on the one hand management claiming an extremely low risk of accident and on the other hand a string of troubles, near failures and actual failures.”

“The United States is often looked at as the progenitor of global warming,” he said. “There’s a very critical legal different between the historical actions of the US and what Canada is now involving itself with. “ He said engaging in development such as the pipeline at what he called a late stage of the global warming cycle looks like recklessness.

Stuart Higgs is a geoscientist and recent graduate with tens of thousands of dollars of student debt. He spoke frankly with the panel about what the personal impact of the pipeline would be.

As a first generation Canadian and the son of an oil patch geologist, Higgs admits that he belongs “to one of the demographics who stands to benefit.” However, he remains vehemently opposed to Northern Gateway and urged the panel to take its task seriously.

Robin Fagnan told the panel that the source of his anger is what he sees as the corporate welfare state that puts corporations and lobbyists ahead of citizens.

“My anger is fuelled by how deeply subsidized the fossil fuel industry is,” he said. “If we were to subsidize the green industry, we literally could turn this around. Not overnight, but we could turn it around.”

Erich Nahser-Ringer told the room he was proud to be an ally to Indigenous peoples.

“I want to say how empowering it is to be on the same side of this issue as the First Nations, to be fighting with them,” he said He also said that he feels a lot of guilt over the way his ancestors treated First Nations peoples. “I don’t want my descendants to feel the same about me.”

The Joint Review Panel will head to Vancouver next week, opening the hearings Monday at 7 pm at the Sheraton Vancouver.

Public viewing will be at The Westin Bayshore.