Eight years after members of the Tahltan First Nation were arrested for protesting drilling, Shell Canada gives up land tenures in the Klappan region. 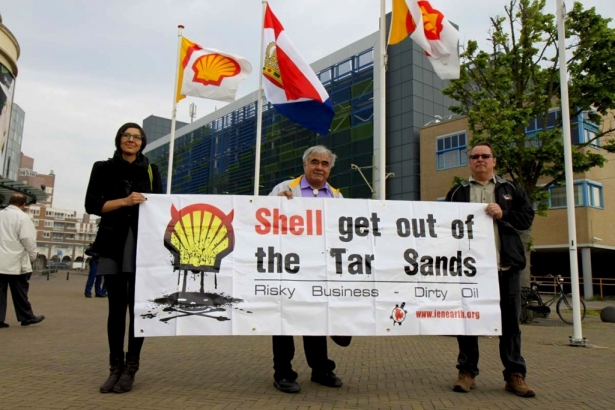 In 2004, 15 members of the Tahltan First Nation in northern BC were arrested trying to stop Shell Canada from drilling for coal-bed methane at the Sacred Headwaters, the headwaters of the Nass, Skeena and Stikine rivers.

Elders and youth blockaded an access road in the Iskut village, blocking drilling equipment and escalating the fight to stop oil and gas development on the 4,000-square kilometer land tenure.

Now, more than eight years later, Shell Canada has backed down, giving up its land tenures in the Klappan, and the BC Liberals have permanently banned oil and gas development in the region.

Conflict began in 2004 when the government sold drilling rights to Shell Canada for $4.5 million without consulting Aboriginal groups. In 2008, the government imposed at four-year moratorium on oil and gas exploration. The moratorium expired December 18, the day the government announced the new ban.

In exchange for its withdrawal, Shell has been awarded $20 million in royalty credits, to be applied against a water treatment plant the company intends to build in the Gundy gas field near Dawson Creek.

“Good water management is central to sustainable operations, and we thank the government of British Columbia for their contribution to this aspect of our exploration and production activities,” said Lorraine Mitchelmore, president and country chair for Shell Canada. “Close relations with Aboriginal communities are important to our many business opportunities in British Columbia, and we are pleased to have found common ground on our petroleum and natural-gas tenure in the Klappan. We now focus on growth opportunities with better commercial and geological prospects in Northeast British Columbia.”

Trevor Frost, a National Geographic Young Explorer who worked with the Tahltan First Nation to stop the drilling, commended Shell for deciding to respect the territory and its people and responding to the thousands of people who signed petitions, wrote letters and participated in protests.

“They were certainly a part in helping making this happen,” he said. “I think they pulled out because they knew it was the right thing to do.”

He said one of the most remarkable things about this victory is that there were no major environmental NGOs involved.

Frost noted the connection between the push to protect the Sacred Headwaters and the debate surrounding the Enbridge Northern Gateway Pipeline, adding that those working against Shell learned a lot from the groups working against the pipeline.

Frost, who has worked on conservation projects all over the world, said the thing that most impressed him about BC was its people’s strong sense of responsibility for their home.

“You really have to ask yourself the question, if everyone just took care of their own backyard, took care of the place where they live, would the world be better off? And I’d have to answer yes.”