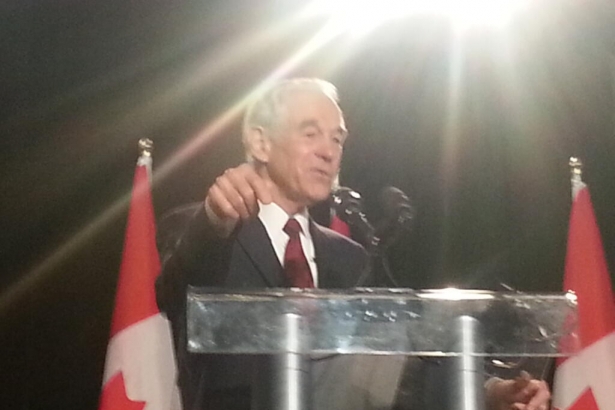 Ron Paul in Ottawa.Twitpic courtesy of @OldFavorites
It is barely 9 a.m. on a cold Thursday morning, but every Conservative worth their blue is packed like bespoke sardines into this Ottawan conference room hoping for a glimpse of the world's most famous Libertarian.

Dr. Ron Paul is on his first trip to Canada, and we are all here to welcome him with Belieber-esque enthusiasm.

As he bounds onstage to the theme from Star Wars, the crowd is already on its feet. I hear the click of camera phone shutters and the swoosh of text messages being sent.

"The spirit of liberty seems like it's alive and well in Canada, and a revolution is happening!"

The room fills with rapturous applause and Twitter blows up.

For the next hour Ron Paul talks extensively and passionately about liberty. He defines it by what it is (freedom) and what it is not (everything else). He encourages governments--his own and ours--to put personal liberty above their own interests. He says that modern societies are failing because they have replaced the concept of personal liberty with 'interventionism'.

"If you believe in interventionism across the board" he says, his voice rising, you want the government to invade personal lives, economic prosperity and foreign policy.

He shouts "I am a non interventionist and that is what freedom is all about!"

And the crowd goes wild.

It is like this for the first half hour of his speech. Dr. Paul holds us enthralled. The governments should not raise taxes, in fact, there should be no income tax! Everyone gets to 'keep their money'. Governments should be smaller. Personal liberty and economic liberty are one and the same.

It's all so simple. Breathtakingly so.

I start to keep a tally of the times Dr. Paul says the words 'central bank'. Five. Seven. Nine. Eventually I stop counting. He did, after all, write the book on why it should be ended. He talks about the dangers of psychotropic drugs and then segues into a nearly ten minute monologue on the folly of bonds, banks and a lack of personal financial responsibility. He questions whether life begins at one minute before or one minute after birth, and why someone can pay him 'a huge amount of money' to end a pregnancy without penalty, and then be prosecuted as a criminal if she abandons a newborn.

The crowd sits politely, but they are less rapt.

I watch a woman across the aisle from me absentmindedly braid and unbraid a lock of her hair. People are slouching in their seats, checking phones and updating twitter. I notice that Dr. Paul's hands shake a little when he holds them still.

For Conservatives, there's a lot to love about the Libertarian ideology. The personal freedoms are without restriction, industries are encouraged to regulate themselves as they see fit and the growth of the economy is constant and perpetual. But for a Canadian Conservative who believes fully in the platform of their party, there is ample grey area where Dr. Paul's libertarianism doesn't fit. He abhors the idea of mandatory minimum sentences for criminals. Canada's Tories are just getting into the business. He thinks marijuana should be legal. Conservatives here want it outlawed (and contraband tobacco, too). He says we should never "send anybody to the legislature unless they tell you the truth all the time!"

Fortunately, he finishes strong, quoting Victor Hugo. "They say you cannot resist armies. I disagree. The one thing that can beat an army is an idea." To him, ideas are pervasive, persuasive and will spread over the internet to make the revolution happen!

Maybe it will. Maybe Dr. Paul is right and we're all dancing on the precipice of total ruin. And maybe Libertarian philosophy, should our society collapse like a cheap suit collar around our collective clavicles, will have a defining role in how we can rebuild.

But for now, for Canada and the Conservatives in this salon, it all seems too simple. Breathtakingly so. 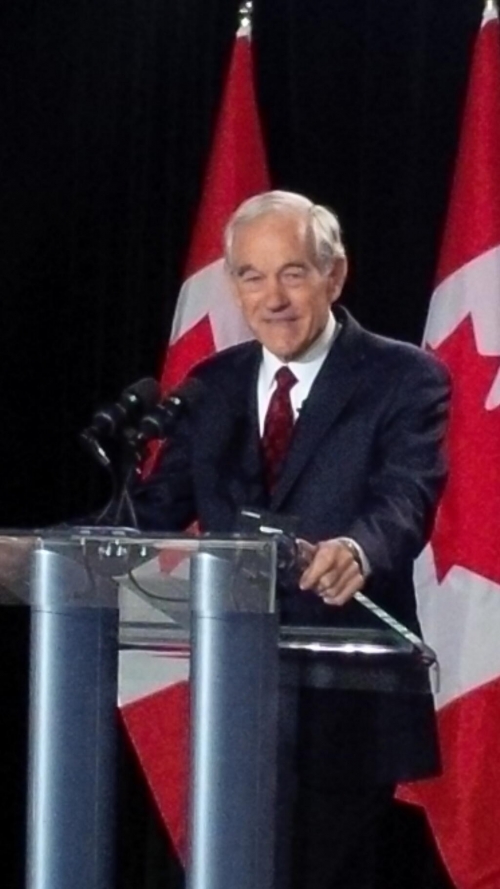