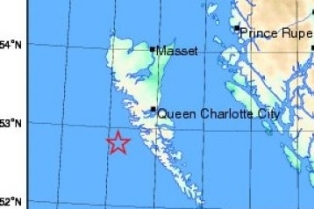 After a strong earthquake struck near Haida Gwaii in Northern BC, Emergency Info BC has cancelled a tsunami advisory that included almost all of the western BC coast, including parts of Victoria and Saanich, zones A,B,C and D. The areas advised to be on guard were:

Emergency Info BC had also notified people that a tsunami warning is in effect for north Vancouver Island, asking people in a low coastal area to "move inland right away".

This is following a 7.7 magnitude earthquake struck near the BC coastal community of Haida Gwaii Saturday night at 8:04 pm PT, according to the U.S. Geological Survey. Environment Canada and the Alaska Tsunami Warning Center issued a tsunami warning for the area from the northern tip of Vancouver Island to Cape Decision, Alaska. Tsunami advisories were reported all down the U.S. coast as far as Hawaii.

Haida Gwaii residents, such as Daniel Cross and his wife Yvette Adams of the Haida Gwaii Art Shop and their children, temporarily evacuated after the earthquake struck.

"I'm back home now from my mountain top retreat in Skidegate -- no injuries or damage," he wrote around midnight.

Areas affected by the earthquake according to Earthquakes Canada:

This earthquake is said to be the strongest in the region since August 1949.