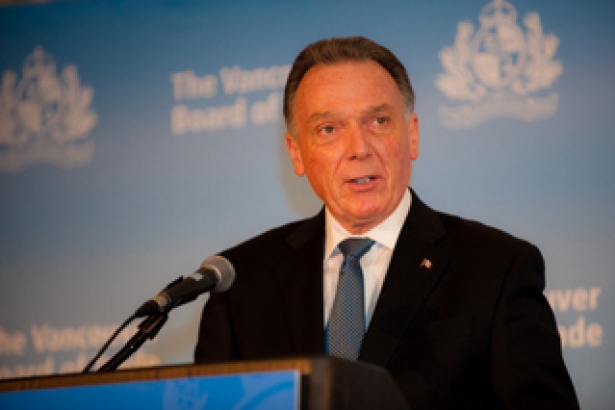 As the world’s attention was drawn to a luminous Rome balcony on St. Peter’s Square, a continent away, a room full of people gathered in a Vancouver hotel to share lunch and listen to a much-less worldly speech by Canada’s minister of environment.

“When it comes to Canada’s record of environmental stewardship, I believe we have a truly remarkable record of achievement. There is absolutely nothing for which we need to apologize to anyone anywhere,” Kent effused.

Over hotel dessert, Kent boasted of his government’s priority to reduce Canada’s industrial greenhouse gas (GHG) emissions, sector by sector. In particular he pointed to new GHG emission standards in the automotive sector and guidelines to reduce GHG emissions from industries burning coal to generate electricity.

“These are the kind of measures that will add real momentum, I believe, to the trend that is seeing Canada’s annual greenhouse gas emissions drop by 48 megatonnes since 2005, emissions remain flat between 2009 and 2010 at the same time when economic growth clocked in at 3.2 percent.” Canada’s current goal is to reduce GHG emissions 17 percent below 2005 levels by 2020.

“At a time of considerable global market volatility when competition for international investment is fierce, the last thing any business needs is more uncertainty in the mix,” Peter Kent told the Vancouver Board of Trade. “And that’s precisely why Environment Canada has taken such a pragmatic and transparent approach to crafting our world class environmental standards.”

However, Kent says the government still has a “determination to balance those environmental priorities with Canada’s economic agenda” and to temper “environmental imperatives with business realities”.

One of those realities is resource rich western Canada. The Harper government is counting on the oil and gas industry in western Canada to keep the Canadian economy churning into the future. The Conservative government has thrown its support behind oil sands projects and major pipelines to the west coast and Gulf of Mexico. And it’s been meeting with US politicians and groups to combat a growing image of Canada as a generator of dirty oil and gas, following in the steps of similar meetings by the premier’s of Alberta and Saskatchewan.

Those meetings are being prompted by a growing realization that the image of Canada as a clean, green, benevolent northern neighbour is taking a beating. As the Obama administration begins to earnestly tackle its climate targets, Canada is feeling pressure to clean up its GHG act, particularly when it comes to Alberta oil sands projects.

In a recent Globe and Mail opinion piece, former Forest Ethics co-founder Tzeporah Berman says, “The fact is that the government and industry plan to triple oil sands production in the next seven years. The resulting emissions will cancel out every other effort in Canada to reduce climate pollution.”

It’s a message not lost on the US which is currently debating the Keystone XL pipeline which would carry Alberta oil to the Gulf of Mexico. As Canadian politicians pitched “environmentally friendly” Alberta oil to US politicians, NDP leader Thomas Mulcair raised different concerns to a Washington audience Wednesday morning.

“The future of Canada’s natural resource sector will be based on our access to global markets and Canada’s access to global markets will be based, in turn, not only the demand for our resources, but on the world’s assessment of how we develop them," he told the Woodrow Wilson Centre. "The question that faces us now is whether that development will be sustainable development.”

He said while President Obama is committed to “real action in the fight against climate change”, he suggested that Canada is not “adhering to the basic rules of sustainable development”.

"In the U.S. people know how to read," Mulcair said. "They know that Canada is the only country that has withdrawn from Kyoto. They know that the Conservatives can't possibly meet their Copenhagen targets (on greenhouse gas emissions) precisely because of the oilsands."

“I think he is playing a very dangerous game with Canadian jobs and Canadian economic considerations. He’s being disingenuous in some of the half-truths he’s presenting in the United States.”

Around the country, leading environmentalists are calling for a credible system that actually reduces emissions. Berman says that should include slowing the expansion of the oil sands, setting firm limits on oil sands emissions and seriously investing in clean energy and efficiency programs.

The government’s handling of the environment file and its growing climate-change image problem has also generated criticism from an unlikely source. Conservative Party patriarch Preston Manning recently told a meeting of Conservatives that “this perceived deficiency on the environmental front has become a political and economic liability.” Other reports, such as a recent Conference Board of Canada study, have also been critical of the government’s climate change initiatives.

Kent, however, is unmoved.

“There are many different way of measuring. There is a spectrum of opinion and evaluation. But I would refer back to the recent annual report of the environment commissioner, who, if you take a look at his report, there are a succession of statements where he says I believe the government has recognized where gaps exist ... and he said the government gets it; there needs to be improvement, they recognize the need for these improvements and he believes we are working on those improvements.”