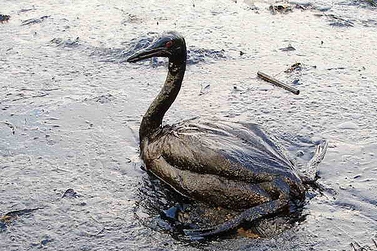 Robert Smith was involved in cleaning up an oil spill on Canada's east coast and told the panel: "It's not something you want to have to witness." Credit: marinephotobank, via Flickr Creative Commons

Gerald Graham, a Canadian Coast Guard trained on-scene commander for marine oil spill response operations, said calculations based on Enbridge’s own research show there is a 8.7-to14.1-per-cent chance of at least one tanker spill greater than 31,500 barrels over a 50-year period, depending on whether the pipeline has a 525,000 or 850,000 barrel per day capacity.

“The consequences of a major oil spill along B.C.’s north coast ... could be catastrophic and irreversible,” he said. “Couple this potentially disastrous outcome with a one-in-seven chance of one or more major spills occurring, and the overall threat level posed by Northern Gateway becomes unacceptably high.”

Michael Woodward, a former oil spill emergency adviser for the Department of Fisheries and Oceans, told the panel he believes the marine component of Enbridge’s project fails the test of good design.

“Nature and weather is unforgiving, heartless, powerful, to be respected,” Woodward said. “Gales are common and in those conditions it will not be possible to safely operate the proposed tugs in open water nor to land marine pilots on these ships.”

He described being on the water in a 230-foot research ship and receiving a call from the Rescue Coordinator Centre.

“Several fish boats had capsized and sunk off the north end of Vancouver Island,” he told the panel. “The Coast Guard aircraft had tried to help them. They launched life rafts; they were all blown away. They could see these men in the water in survival suits with their helicopters; they couldn’t attempt to rescue them . . . We were asked to come to their aid.

“We gave it all we could. This 230-foot boat — the hammer’s down, the engines are smoking, the bows leaping out of the water. Lumps of green water are smashing into the wheelhouse 50 feet above the water line. We’re taking damage. We’re pushing on.

“We had to give up … The lifeboats on the lower deck got carried away. I mean smashed to bits. We tried to go to these people. We wouldn’t be doing this unless we were trying to save somebody’s lives, but we didn’t make it. These people all died. This is a deadly place. It’s not to be trifled with.”

Woodward told the panel operating supertankers on the north coast of B.C. is a recipe for a bitumen disaster: “No amount of money or human intervention will be able to fix the damage caused by a supertanker-sized bitumen spill.”

Robert F. Smith, a retired engineer, told the panel about a seminal moment in his life.

“In 1970, I faced the biggest challenge I’ve ever faced in my life,” he said. “I was a young officer, Canadian military engineer officer, in Gagetown, New Brunswick, and on the 4th of February, 1970, a Liberian oil tanker ran into a rock in Chedabucto Strait and the biggest oil spill on Canadian shore occurred. And I was tasked to clean it up. So I've been there.”

Smith described finding 190 kilometres of coastline covered with tar. “They spilled two and a half million gallons of Bunker C. Bunker C is probably lighter than tar sands because it floats,” he said.

Smith’s job was to command the troop responsible for containing and cleaning up the oil.  “It's not something you want to have to witness,” he said. “It’s impossible to clean up. Once it hits that shore and gets stuck like that, it's from high tide to low tide as far as you can see.”

He outlined the challenges they encountered in something as simple as getting the tar off their shovels and into barrels — the tar would stick, encumbering the cleanup.

“What I learned was wisdom doesn’t come from study, Smith said. “Wisdom comes from showing up for life. So make sure those people show up for life and demonstrate that they got the technology on the ground in the situ, not in some sunny afternoon in a harbour or in a classroom or in a laboratory.”

He urged the panel to find out what happens when the oil hits the ocean and sits there for a week, leaks into a stream or sinks.

“I don’t want anybody else to have to live it again for me,” he said.