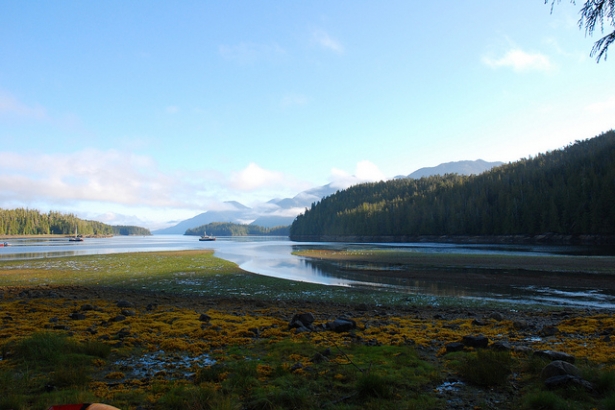 Barnard Harbour in the Great Bear Rainforest is just off the proposed Enbridge oil tanker route.

If the Enbridge Northern Gateway pipeline were built, a single accident could irrevocably change BC's 'Super, Natural' brand and billion-dollar tourism industry, argues Bill Eisenhauer, the former communications director for Tourism British Columbia and a board member for the Victoria Hospice Foundation.

“From my perspective, this province and a lot of companies operating in tourism have spent a lot of time and money and energy building this brand of ‘Super, Natural British Columbia,’ ” Eisenhauer said over the phone. “It’s built around adventure tourism, eco-tourism and the outdoors — around the natural splendour of the place.”

Eisenhauer kicked off the Enbridge public hearings in Victoria as the first presenter to the joint review panel on Friday. A 45-year-old dad and communications professional, Eisenhauer quickly extinguished any pre-conceived notions about opponents of Enbridge Northern Gateway being radical environmentalists. He told the panel in no uncertain terms that Enbridge’s proposal to build a pipeline across British Columbia and bring 225 oil tankers into Kitimat each year is not in the national interest.

“It’s our country, it’s our coast and there are many other less risky and less toxic ways to generate economic growth. I needed to stand up for that,” he said to the three-member National Energy Board panel.

“It’s perception. People immediately cancel their trips. They’re not sure exactly where Kitimat is. They just know it’s the West Coast of British Columbia.”

A study by Oxford Economics for the U.S. Travel Association concluded the impact of the Gulf spill could cost U.S. coastal economies $22.7 billion over a period of three years, Eisenhauer told the panel.

“And it’s not only going to kill tourism on the North Coast for years to come. No, it’s going to have a significant, lasting negative affect on tourism in Vancouver and Victoria, Tofino and the entire West Coast.”

Continuing in his presentation, Eisenhauer posed the question:

“How many people are going to book their next family beach vacation in ‘Super, Natural British Columbia’ after they see clean-up crews on the TV news, day after day, wiping oil off the beaches and collecting up dead seals, otters and seabirds?”

As the first speaker, Eisenhauer’s presentation was widely featured in the media. He believes this issue cuts deep through the whole spectrum of society in British Columbia.

“This is the type of issue that brings out the best in people who care about our province and the future for our kids and if you’re going to stand up and say something, now’s the time to do it.”

Still, he has no illusions that the joint review panel will make the final decision on the proposal given the federal government’s well-publicized support of the project. With a provincial election just five months away, he thinks the provincial government has a key role to play.

“People expect their elected leaders to have a position on this. It’s too big of an issue,” he said.

“The party that has the best position on this issue will be getting my vote.”