Racist groups in B.C. are part of an international network exposed by recent Anonymous anti-Nazi document leaks, linking online organizing with a string of violent attacks on people in Vancouver. 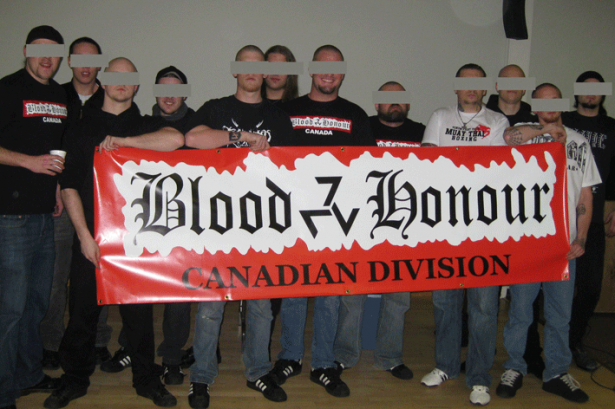 Human rights groups are raising alarms about Blood and Honour and other racist groups active in B.C. Photo from Anti-Racist Canada.

Racist groups in B.C. are part of an international network exposed by recent anti-Nazi document leaks linking prominent hate groups' online activities with the suspects of a string of violent attacks on people of colour in Vancouver. The hacking attacks come amid rumours that white supremacists are planning to rally in Vancouver on March 21.

"The recent electoral and country-wide growth of hate groups in Europe has given incentive to hate groups in the province of B.C., and we have seen the growth of such groups as Blood and Honour and Volksfront to name two."

Human rights and anti-racist activists are praising Anonymous, saying its recent release of troves of data on neo-Nazi and other hate groups has likely undermined their increased activity in British Columbia.

Dutton alerted the Vancouver Observer to B.C. racists connected with the Anonymous files, dubbed 'Nazi-leaks,' which were released this week.

Specifically named in the files are Robertson De Chazal – whose February 13 trial is expected to face protests from anti-racist groups – and Alastair Miller, both of whom are charged with setting a Filipino man on fire, and assaulting a black man who came to his rescue, in 2009.

“We continue to see growth in B.C. as the economy suffers and young people cannot find jobs," Dutton said. "These young people are encouraged by hate groups to vent their frustrations on immigrants and people who they see as different – visible minorities and First Nations groups.”

Dutton said he suspects that the 'Nazi-leaks' have undermined several groups active in the province from recruiting and organizing online. In fact, one of the largest groups targeted with leaked emails and data – Blood and Honour – is the same one of whom De Chazal, Miller and another racist assault suspect Shawn MacDonald are alleged to be members. If the leaks are authentic, they reveal that De Chazal and Miller are on Blood and Honour's membership list.

The documents also reveal substantial divisions within Blood and Honour in Vancouver, with two rival groups (one affiliated with the group's Calgary branch) clambouring to organize a March 21 rally - divisions which may work to anti-racist organizers' advantage, Dutton said.

“The leaks provide detailed information about the internal workings of hate groups, not just in Europe and the U.S., but also in Canada,” Dutton said. “It's really, really important in terms of destabilizing hate groups.

“Neo-Nazi hate groups are very violent hate groups. These are dangerous, murderous groups. It's surprising how many people in Canada have contact with and belong to Blood and Honour. In British Columbia, where local chapters are actively competing for members and control, the leaks will severely (hamper) their ability to organize.”

But while Dutton is hopeful the leaks will help “shut down Nazi groups in Canada,” he warned that the new spotlight might simply push the groups further underground or even lead to public rallies to bolster their support.

White supremacist rally in Vancouver
Blood and Honour is rumoured to be planning a rally in Vancouver to mark March 21, International Day for the Elimination of Racial Discrimination – claiming that white people are now the victims of “reverse racism.” Similar racist March 21 protests in Calgary, Alberta over the past several years have led to counter-protests by anti-racist groups.

“This obviously weakens the B.C. groups and may force them underground,” Dutton said. “However, there is an alternative scenario.

“Because security for Nazi groups has been totally compromised, it may place more burden on local organizers to hold public events in order to recruit new members. This the danger that community groups must now face. The ball is now in the anti-racist camp to educate and prevent further Nazi violence and meetings.”

Several local organizations - including No One Is Illegal and an alliance of Filipino groups have issued statements against racism in response to the hate crimes charges.

The Vancouver Police Department hate crimes unit and the B.C. Hate Crimes Team are both investigating hate crimes in the province, though neither were available to comment before press time.