PETA protesters take issue with Harper’s support for the slaughter of baby seals, and say it's costing taxpayers millions to promote the dying industry. 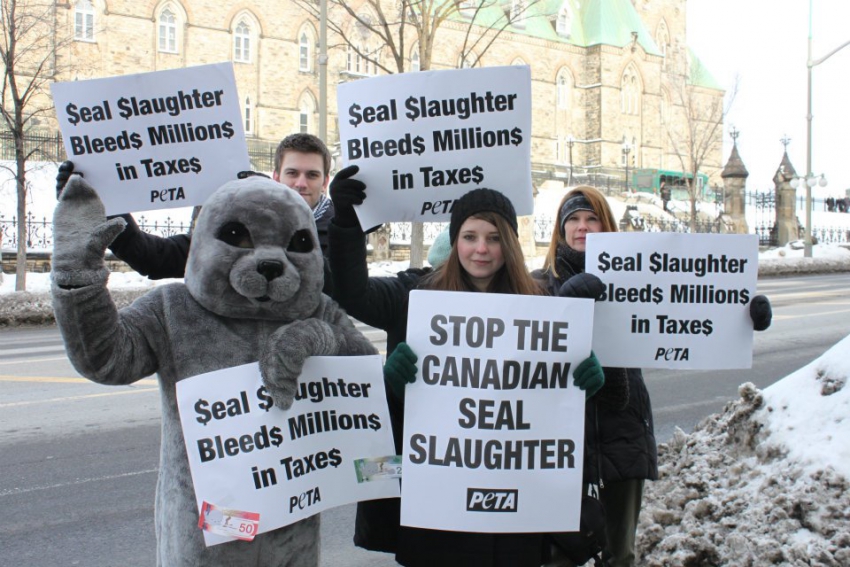 Photo of seal hunt protesters in Ottawa, courtesy of PETA

Their message: seal hunting is not worth the cost to taxpayers.

During a media event and photo op set up by the Prime Minister’s Office, Harper confirmed the government’s endorsement of the controversial Canadian industry. He was joined at the event by Minister of Health Leona Aglukkaq, also the Minister for the Canadian Northern Economic Development Agency, and Pujjuut Kusugak, Mayor of the Northern community of Rankin Inlet.

For animal rights organizations like PETA, the governments’ support shows a blatant disregard for the concerns of citizens both here and abroad.

“The Canadian government is going against the will of the majority of Canadians, while slapping us in the face by spending millions of our tax dollars on this dead industry,” said PETA organizer Emma Lavender.

“Canadians should not have to fund this,” she said.

According to PETA’s seal hunt fact sheet, the federal government pours up to $7 million a year to maintain an industry that only nets about $1 million. While seal pelts used to earn hunters over $100 each, the Department of Fisheries and Oceans reported that in 2010, pelts were sold for only about $20 to $25—a price many believe is much too small to warrant such a brutal practice.

The declining value of seal pelts has had much to do with international policies that have developed over recent years. In 2009, the European Union voted to ban the sale of seal products and the United States quickly followed suit, passing legislation to try to end the annual hunt.

“There are no markets,” explained Lavender.

“The US, the European Union and most recently Russia — which imports 95 per cent of Canadian seal fur—have all banned seal imports. So the industry is dead.”

Despite these discouraging trends, officials from a number of government ministries are amping up their support for the industry. Today in the House of Commons, Fisheries Minister Keith Ashfield urged other Members of Parliament to sport seal fur lapel pins, which were provided by the Nunavut Government and the Nunuvut Arts and Crafts Association.

“Sealing is an important economic and cultural driver in Canada’s eastern, arctic and northern communities,” Ashfield said in a statement.

“It is a long-standing and integral part of Canada’s rural culture and a way of life for thousands of Canadians.”

This big push for sealing comes as part of the Northern Lights 2012 Business and Cultural Showcase, being held this week in Ottawa. While proponents of the seal hunt often rely on the notion that it’s a tradition deeply ingrained in Northern Aboriginal culture, animal rights activists say the government often uses this argument to validate more harmful, commercial practices.

“It’s misleading because the Canadian government is really using the Aboriginal hunt to promote the commercial seal slaughter.”

Lavender says PETA will continue to protest the commercial sealing industry in Canada for as long as it is still permitted to go on.