Advocates of raising financial aid for the poor renew social security appeal as Surrey MLA Jagrup Brar ends a 31-day experiment living at welfare levels – $7 in debt and 12 kg lighter. Poverty, he said, is a health and safety crisis. 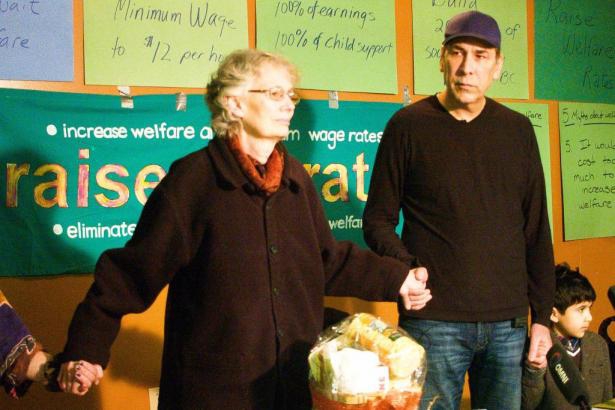 Call it a poverty diet – but poverty is a matter of health and safety, a B.C. politician argued. After living for the month of January on $610 – welfare's financial aid for a single employable person – Surrey MLA Jagrup Brar found himself not only $7 in debt, but 12 kilograms (26 lbs) lighter.

Today, the seven-year New Democratic Party (NDP) politician woke up in his home, with his own family, whom he had only been allowed to visit once a week – and even had to pay them for his meals.

Dressed in plain black shirt, faded jeans and blue baseball cap, Brarremoved his well-worn work boots for a weigh-in. The scale didn't lie: after only 31 days in soup kitchen line-ups, a cramped single resident occupancy (SRO) room, and even dumpster diving, the strikingly tall MLA had dropped from 108 kg to 96.5 kg.

“That diet is available to anyone,” joked a man from the back of the boisterous room in a Powell Street co-op housing common room, to laughter from many Downtown Eastside (DTES) residents attending his farewell speech and press conference yesterday.

“At this rate of losing weight, in nine months he would completely disappear,” joked veteran anti-poverty advocate Jean Swanson. But the message of Raise the Rates, the group behind Brar's month-long 'Welfare Challenge,' was dead serious.

Affordable housing and food out of reach

Thanking Brar for being the sole MLA to accept her group's challenge, Swanson added that the B.C. government's other social assistance rates – including disability and families with children – are also unacceptably low.

“Jagrup figured out in two weeks here in the Downtown Eastside what other politicians still don't know, but that we've known for years,” she said. “The rates are too low, we need housing, SROs are like homelessness, and this is a caring community.”

During his parting speech, Brar paused, seemingly overwhelmed by emotion, as he described some of the lessons learned from his month on $610 – half of which was spent in his hometown, Surrey; the other half in a BC Rooms apartment in Vancouver's Downtown Eastside.

“I accepted the challenge just to tell a story – to tell the story of communities in B.C. living in poverty,” he said. “The experiences I've gone through in the last month were life-changing for me and life-changing for my family.

“I have met single mothers, refugees, people from First Nations ... and many more. I have listened to their stories – their stories are very powerful. There were times that I came really close to tears. I don't think that human beings should have to live that way – but that is happening right here.”

Brar confessed that when the time came to move into a Downtown Eastside apartment – in which all he had was a single bed, sink and shared bathroom down the hall – he arrived with fears about the infamous neighbourhood – and the poorest off-reserve community in Canada.

“I want to be frank with you,” he said. “When I came here, I came with my fears.

“I came with my fears about how you were going to accept me or not. You changed my perspective – very much so. The love, care and respect you have shown to me, I have never seen anywhere else.”

Brar was thanked for accepting the challenge by a series of residents who had shared their experiences on government assistance with him over the previous weeks, some of whom presented him with artwork.

“Watching him go through it, and leading him around, I could see he was learning a lot of things,” Stuart Fraser, who lives in BC Rooms and has been on $610 welfare for nearly two years, told the Vancouver Observer. “He was a good student.