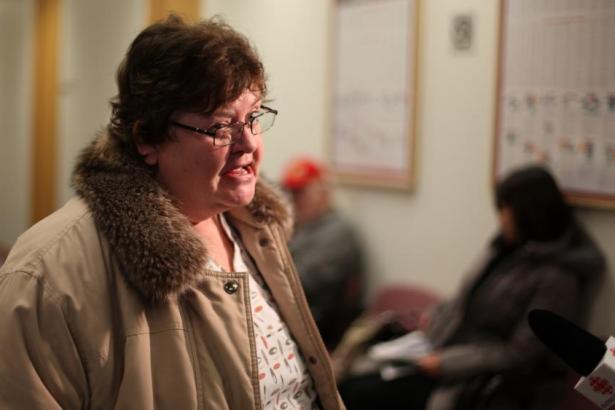 Lori-Ann Ellis, whose sister-in-law's remains were found on Pickton's farm, outside the Missing Women Inquiry. Photo by David P. Ball

The author of a key 2002 RCMP report on the botched Robert Pickton serial killer investigation stood by his generally favourable report at the Missing Women Commission of Inquiry this morning, maintaining his belief that sex workers are “transient by nature” and “prone to violence.”

However, Supt. Bob Williams of Alberta – Canada's second-longest serving Mountie – admitted on the stand that more should have been done to investigate Pickton after he came to the RCMP's attention in a 1997 attempted murder case, but said he did not know at the time that Pickton's farm had been investigated in a much-earlier sexual assault investigation in 1990.

Williams also said that police too quickly dismissed informants who alleged a Pickton associate told them she had witnessed the pig farmer hanging and skinning a sex worker in his Port Coquitlam barn -- and should have been concerned when undercover officers witnessed the suspect dropping barrels off at a Vancouver meat rendering plant and visiting the Downtown Eastside.

“I believe from my experience in dealing with sex trade workers they predominantly are transient in nature,” Williams told the inquiry. “I've had experience with them.

“Some people I assume working in the Downtown Eastside may have been there for some time, but certainly they weren't brought up there or stayed there. Some have a tendency to move around from city to city, that's why we referred to it as transient in nature.”

When questioned, though, Williams admitted that his “experience” of sex workers was based entirely on dealing with women at Edmonton's Klondike Days, the Calgary Stampede, and the Alberta tar sands. His description of sex workers as “transient” was part of the historical context in Williams' report explaining why police failed to develop complete profiles on dozens of Downtown Eastside missing women cases.

Although the Vancouver Police Department officially apologized for their part in the Pickton investigation's fail – and continued to express some contrition over the past few months of the Missing Women Inquiry – the RCMP has never issued an apology, even though the murders happened in their Port Coquitlam jurisdiction.

Williams was also questioned about why investigators failed to follow up on allegations that Pickton associate Lynn Ellingsen helped bring a sex worker back to his farm and later witnessed her friend skinning the woman's corpse in his barn. She later denied to police she had ever talked about the incident, and backed out of a polygraph test at the advice of her lawyer.

“I believe that the credibility of Lynn Ellingsen – what she allegedly saw and purported to tell other people – was very important,” Williams told the Inquiry. “And certainly, had steps been taken to go further with other options to make a determination whether in fact she was telling the truth.

“I wouldn't say it was not properly handled – I say it was handled but it wasn't sufficiently handled to the extent that I would have handled it.”

In Pickton's 2007 trial, however, Ellingsen told the court what she had seen on Pickton's pig farm years before.

“I saw this body,” she told the trial. “It was hanging. Willy pulled me inside, behind the door. Walked me over to the table. Made me look. Told me if I was to say anything, I'd be right beside her.”

“There were knives with blood on them. He was full of blood himself."
One family member of a Pickton victim said that much more interrogation and people directly involved in the case are needed to get to the bottom of what went wrong.

Lori-Ann Ellis's 26-year old sister-in-law, Cara, was likely murdered by Pickton, although charges stemming from her death were among the 20 stayed by the Crown in a controversial move which saw Pickton convicted of six second-degree murders after having confessed to 49.

“We're here looking for the truth,” Ellis said during a break from the Inquiry.

“We are not looking for the police's version of the truth. We want to know what happened.”