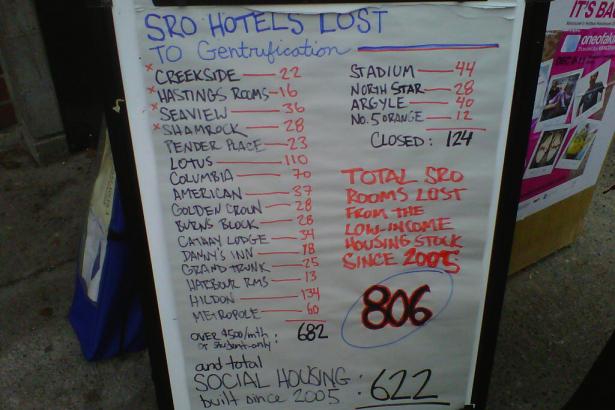 Statistics on changes to low-income housing in the Downtown Eastside since 2005 compiled by Carnegie researchers. Photo by Will Campbell.

The supply of low-cost housing used by residents in Vancouver's Downtown Eastside is being whittled away as buildings are gentrified and rents jacked up - resulting in 806 cheap-rental rooms disappearing in the last six years, a survey released Wednesday says.

More than 80 per cent of those units have vanished due to monthly rent costs rising to more than $500 or to property owners renting only to students, the Carnegie Community Action Project report found.

It says the remaining rooms have been purposely left vacant by landlords hoping to capitalize on the wave of speculation and gentrification spreading from Gastown to east of Main Street that is transforming the so-called single room occupancy hotels into market-cost housing.

“We can’t end homelessness unless the city and the province put the brakes on gentrification,” co-author Jean Swanson said at a news conference.

Of the for-profit SRO units included in the survey, seven per cent, or 235 rooms, were in buildings where the maximum monthly rent was $375 – the basic welfare housing allotment. That’s a drop of nearly 50 per cent from the number of rooms at that rent level in 2010.

The number of rooms in buildings where the lowest rent is upwards of $600 grew by 227 units since 2010, while the supply of units with rents starting at $425 dropped by 122 rooms.

The city has created 622 social housing units in the area since 2005, according to the report.

It says a municipal bylaw on Downtown Eastside SRO hotels doesn’t count units lost due to rents being hiked or by other restrictions on who is taken on as a tenant.

The Single Room Accommodation bylaw requires owners get the city’s permission before converting or demolishing low-income rooms in designated hotels. Carnegie is calling on the rule to be changed to ensure rent increases to more than $375 a month are defined as a housing loss requiring city approval.

Condominium development on non-protected properties are fuelling gentrification and driving up rents for everyone in the area, the report says.

The result? A net loss of housing for welfare recipients and marginalized residents in the Downtown Eastside, leaving them with few or no options to put a roof over their head.

“As we lose more and more buildings, they’ll be less likely to have someplace to go,” co-author Ivan Drury said at the news conference, which occurred on a sidewalk across from the York Rooms hotel on Powell Street.

The SRO building is undergoing renovations expected to raise rents above the current $425 rate.

“Gentrification through condo development is destroying low-income housing, it is producing homelessness and it is going to become worse,” he said, since no further neighbourhood social housing is currently planned after 2013.

Volunteers fanned out to about 90 hotels targeted by the survey to ask about room prices and availability.

Robert Bonner was one of them. He said one residential hotel told him there were no vacancies and that rent would be $800 only after he cleared a waiting list.

“So I walked out of the lobby. Two minutes later Ivan (Drury) walked into the lobby, talked to the same guy and was told the rent for him would only be $675 dollars and there would be something available for him at the end of the month,” said Bonner, who is aboriginal.

Hotel staff assume aboriginals and Downtown Eastside residents have drug problems and refuse them rooms, Bonner said, even when they work, as he does.

“They hear we’re from the Downtown Eastside (and) they naturally assume that I’ve got an addiction problem or there’s something wrong with me.”

Herb Varley pays $425 a month for a York Rooms unit “no bigger than a jail cell.” That means the former construction worker has to skim $50 from his welfare cheque to plug the rent gap – money that would otherwise go towards food.

“Even when I was working, it was hard enough for me to find housing. But now that I’m on income assistance and I live on the Downtown Eastside and I’m First Nations, now I’ve got three strikes against me.”

A handful of the hotels surveyed also added a significant charge for a second occupant. Having a second person drove up rent between an additional $200 to $375 at 13 hotels requiring an additional guest fee.

The report calls for the city to freeze condominium developments in the area, amend the special low-income housing bylaw and buy 50 sites for social housing in the next five years.

Among other recommendations, it says the province should tweak the Residential Tenancy Act to link rent control restrictions to units, not tenants.

Right now, owners face no legal cap on rent increases once an occupant leaves. Housing activists say this results in landlords trying to force out existing tenants by offering them money or by using other forms of coercion.

Once the unit is vacant, the monthly cost of living there can be raised without restriction.

The Carnegie report comes less than 24 hours after city councillors unanimously approved the creation of an affordable housing task force.

A former B.C. Liberal cabinet member and real estate developer, Olga Ilich, was named co-chair of the panel on Monday. Mayor Gregor Robertson is the other co-chair for the research-and-recommend initiative, which will draw on expert advice for its final report to council.

One of the top priorities for the panel is identifying the forces at work escalating housing costs and protecting existing affordable housing.