For one hour, starting at 6 a.m. Saturday, Vancouver's early-risers (and astronomy nerds) might witness the moon turn blood red in a full lunar eclipse - but will the universe treat us to a rare 'impossible eclipse'? 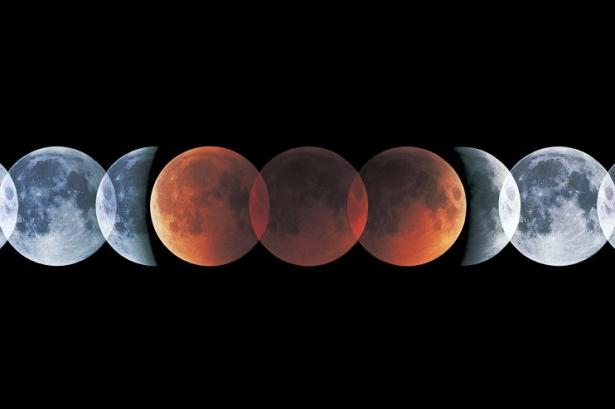 Remember that extra hour of sleep you gained when the clocks fell back last month?

Six a.m. tomorrow (Saturday) might just be the time to cash in your surplus dozing. That's when a full lunar eclipse – the last until 2014 – will turn the moon orangey-red for nearly an hour. And if the universe -- not to mention the infernal weather -- smiles on Vancouver, astronomers are predicting a meteor shower to boot.

“That red light on the Moon during a lunar eclipse comes from all the sunrises and sunsets around the Earth at the time,” explained Sky & Telescope magazine's editor, Robert Naeye, in a statement. “If you were an astronaut standing on the Moon and looking up, the whole picture would be clear.

“The Sun would be covered up by a dark Earth that was ringed all around with a thin, brilliant band of sunset- and sunrise-coloured light, bright enough to dimly light the lunar landscape around you.”

If witnessing every single sunrise and sunset at once isn't mind-blowing enough, then there's the bizarre matter of “impossible eclipses” -- the product of selenelions and syzygies. Are these mythical hybrid beasts? Several dialects' words for sneezing?

Syzygy – pronounced 'SIZ-a-jee' – happens when three celestial objects are positioned in a straight line. During a full lunar eclipse, the Earth slides directly between the sun and the moon, preventing the sun from lighting up the moon as it normally does. The sun and moon are exactly opposite each other.

(Incidentally, Syzygy is also the name of an obscure Japanese “microtonal pop music” band as well as the title of an episode of the X-Files completely unrelated to eclipses).

A selenelion – pronounced 'seh-LEH-neh-lee-on,' not to be confused with Celine Dion – occurs when you can see both the sun and moon in the sky at once, even though the earth is between them.

Wait, how is that even possible? Aren't they 180 degrees apart?

While it may seem like a geometric contradiction – hence being nicknamed “impossible eclipses” -- scientists say that selenelions are actually optical illusions caused by light being refracted (distorted) by the atmosphere around the Earth's horizon. It's the same effect that allows us to see the sun several minutes before it has actually risen. The moon and sun are opposite, but they appear to us higher above the horizon than they actually are.

If a selenelion graces us with its presence tomorrow, according to the British Broadcasting Corporation, it will be the second time since the 17th century – back when the Tudors ruled England – that this peculiar phenomenon was been recorded; other records document the selenelion obsession of a French eclipse fanatic, Antoine-François Payen in 1666. However, some sources claim that several selenelions have been witnessed since. Either way, it's pretty cool.

In any case, the “impossible eclipse” can only occur for anywhere between one and six minutes, and makes for a bizarre and rare optical illusion to talk about later.

Here are some practical tips for getting the most out of the lunar eclipse:

1. Pick your spot. Avoid street lights, as well as trees or buildings blocking the horizon – much of the eclipse action in this part of the world will be close to the skyline. We recommend atop Queen Elizabeth Park (near Oakridge-41 Skytrain station -- the Canada Line is up and running by 5 a.m. tomorrow).

2. Set your alarm for bright and early. The full eclipse begins at 6:05 a.m., but a partial eclipse starts at 4:45 a.m. If that's too early, at least head out for 5:45 a.m. to catch the 10 minute transition period as the moon gradually disappears behind the Earth's shadow.

3. Alternatively, plan an all-nighter – appropriate downloads might include Twilight: Eclipse, the X-Files 'Syzygy' episode (season 3, episode 13), or Bonnie Tyler's uber-epic music video for her 1983 hit 'Total Eclipse of the Heart' and it's must-see literal spoof version.

4. Binoculars. You don't need any special equipment to see the event, although regular binoculars help. And unlike a solar eclipse (when the moon passes between the sun and the Earth) you can't go blind from staring at the reddening moon. Stare away.

5. Take a photo. If you want photos to document the eclipse, you'll want to set your camera to the slowest shutter speed to let the most light in. Photographers recommend several minutes – or, for an interesting streak effect of the moon changing colour, perhaps your camera has a 'bulb' or 'night' function that can take a picture for up to an hour. Don't hold your camera – use a tripod, or balance it on a log or something. Touching it at all will blur the picture – set the camera to shoot on a timer or remote control if you have one.

6.  The extra nerdy science-project types among us (I'm not one) can take part in an international effort to measure the moon. “International Measure the Moon Night,” as it is called, is asking the public's help to figure out how far away, and how big, the moon actually is. Wait -- the Ancient Greeks, in fact, already figured it out, but you can too!

If all this seems like way too much to accomplish this early in the day, thanks to the Internet you could also simply lie in bed with your laptop and catch the eclipse online before passing out again. Slooh, a remote astronomy website, is hosting a live eclipse feed starting at 5 a.m. -- narrated by astronomer Bob Berman.

Here's the full schedule (if you're waking up this early, don't hit snooze -- this is not the time to be fashionably late).