Her City Hall boxes still unpacked, former councillor Ellen Woodsworth shares tea in her living room with the Vancouver Observer – reflecting on her time in office, her successes, and what's next. 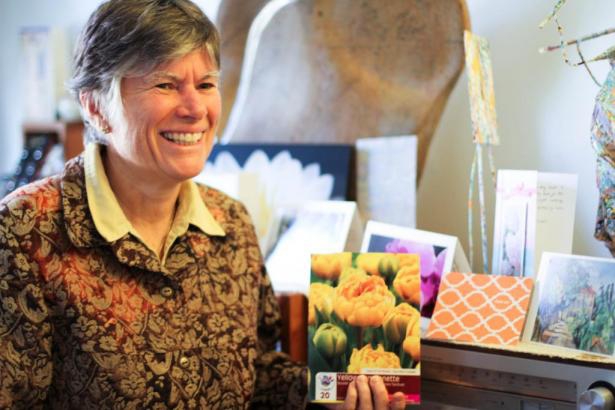 Ellen Woodsworth, in her east Vancouver home, is surrounded by cards of thanks and support from across the city following the loss of her City Council seat November 19. Photo by David P. Ball

Former city councillor Ellen Woodsworth offers me a pair of hand-knit blue striped socks as she welcomes me into her east end row-house just off Commercial Drive – to keep my feet warm, she says. She's on her cell phone, and as she busies herself making us tea the house phone rings.

“Can you, uh, get that for me please?” she asks. Thankfully, no one is on the other end of the line. As I settle into a faded brown couch in the living room of the row-house Woodsworth has rented for 32 years, I realize I'm completely surrounded by a decades-long collection of art, sculpture, fabrics and furniture. No knick-knacks here -- all of it evidently meaningful to her and her partner, Jo.

On Tuesday, Woodsworth – known for her principled stands on affordable housing, homelessness and support for the Downtown Eastside community -- officially ended her her second term on city council (the first was 2002-2005). Her brother, Dick, helped her move out of her office. He shows up during our interview, chatting about their great-uncle, renowned socialist politician and churchman J.S. Woodsworth. The office boxes he helped his sister move are yet-to-be-unpacked in the basement.

When prompted, she reveals she's most proud of raising the profile of housing and homelessness, fighting for human rights and civil liberties -- particularly during the 2010 Olympics – and securing resident-developed neighbourhood plans for Marpole, the Downtown Eastside, the West End, and Grandview-Woodlands.

Woodsworth draws my attention to a large framed Stewart Marshall watercolour adorning one wall – it's a large, bleak prairie landscape, snowy furrowed fields pierced by a stubble of cut grain stalks, a solitary grain elevator shining against the vast sky. To me, the stark, eerie landscape reminds me of Woodsworth's new title of “former councillor” – pushed off city council by only 91 votes, uncertain of her next steps, waiting for a warmer season. In fact, she explains that she actually bought the Marshall print right after she lost the 2005 election.

“I had my last pay cheque from city hall,” she laughs, as the kettle begins to shriek comfortingly. “I had no idea where I was going to get money from – (this painting) just moved me very much.

“You can feel them,” she adds, motioning along the arching ploughed lines of cut grass, “how stubbly they get out of the season.”

The veteran activist-turned-Council of Progressive Electors (COPE) councillor spends the next hour reminiscing about her second term in office, her theories on why COPE was pushed out of all but Allan Wong's lonely school board seat (a combination of overspending by Vision and NPA, vote-splitting on the left, and not putting David Cadman's name on the ballot) -- and what's next in her own life. Her tone is considerably more upbeat than when we spoke on election night, and later when we arranged our visit today – that tone, I'd describe as sombre, disappointed, perhaps resigned.

“In a way, this may be a gift,” Woodsworth says calmly, looking out the living room window at a housing cooperative across the street, and newly commissioned street mural. “There's other really, really important things I couldn't do while I was on council.

“I was able to do so much – I've really accomplished a lot. But there's all kinds of other ways in which you can accomplish building a better world, fighting for social justice.”

That ultimate question – her next steps -- depends mostly on whether she and her partner are evicted from their long-time home. The heritage row house  they've rented for decades has been sold to a new owner, and their future is up in the air.

“Where do we go?” she asks. The question does not seem intended to draw pity; it is not rhetorical. “My partner's on a low income. I thought I had a job -- now I don't have a job – and the income I thought I would have to find a house all of a sudden isn't there.