“At this time of the year, I wonder if any institution today could actually accommodate Mary and Joseph,” says Rev. Ric Matthews, executive minister at First United Church. 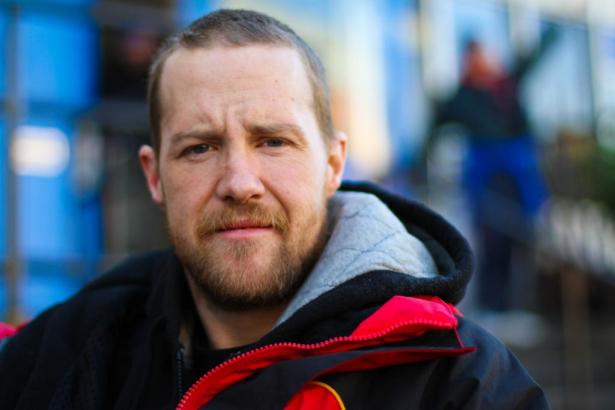 With temperatures dropping, this week's city-versus-province squabble over homeless shelter funding has clients and staff at a Downtown Eastside shelter furious.

Furious enough to hang a protest banner across the entrance this weekend, blasting the city for tossing the homeless back on the streets.

The First United Church shelter made the news last Wednesday after fire officials ordered its controversial low-barrier homeless shelter to turn away 27 homeless people because it had reached its official occupancy capacity of 240.

The closure came after a public dispute between Mayor Gregor Robertson and provincial Housing Minister Rich Coleman over funding for shelters during the winter months.

Coleman eventually agreed to provide funding, but criticized the church's Hastings Street shelter for providing beds to people who Coleman insisted already had other accommodation.

Vancouver's fire chief, John McKearney, has said he will send staff regularly to ensure the 240 occupant limit is met.

Wednesday, Shannon Poynter was one of the shelter residents there when the fire inspectors arrived.

“I was laying down; I heard the ruckus and the commotion,” Poynter told the Vancouver Observer. “The fire marshall was here, the chief, and a few firemen as well.

“They're setting (First United Church) up to fail," Poynter said. "The people that are here are in the worst shape possible, there is nothing easy for them. These are the people who were kicked out of the mental hospitals when they closed all of them.”

Poynter accused the city of hypocrisy in "arbitrarily" enforcing occupant levels in order to strengthen its political case that more beds are needed. During the 2010 Olympics, Poynter said, occupancy levels were allowed to far exceed 240 in order to hide Vancouver's homelessness problem.

“During the Olympics, we were the best people on earth – it didn't matter if there was 400 people in here, it was not a problem,” he said. “Now the Olympics are gone, done and over with.”

At the same time, he criticized First United Church, claiming that many of its clients already have housing -- a claim Matthews disputed.

Coleman also said the shelte, which has the lowest entry barriers in Vancouver and serves many clients who are unable to access other shelters, will be phased out over the next year in light of controversy including several sexual assaults and the hiring of a known sex offender on staff.

One former First United resident told the Vancouver Observer she thinks the church is being unfairly singled out.

“They're trying to shut this place down, actually -- that's what the rumour is,” said a woman who identified herself as Ruby, 22.

“I think that's very unfair. If they didn't have this place, where would they go? They'd sleep in the back alleys. The chances are going to be higher they're going to get bothered and raped when they're sleeping outside.

Rev. Ric Matthews, the shelter's director, said he is frustrated and baffled by the city's moves – considering that the church had been “in conversation” on the occupancy issue for several months before fire officials were ordered to enforce the limit. He described the incident as symptomatic of a “litigation and liability” culture – with near-Biblical consequences.

“At this time of the year, I wonder if any institution today could actually accommodate Mary and Joseph,” said Matthews, who is executive minister at First United Church. “The risk of putting a pregnant couple in the stable at the back would be just too great for any institution today to take on officially.

“Tonight, if we enforce the occupant level, where do these folk go, quite literally? Is it true they would be safer on the streets? Do we at least provide them with tents? What do we do? I don't have answers, but we should be wrestling with the questions.”

The enforcement of the 240 capacity limit last week came after the church was warned by fire officials and the city manager that going over the limit would result in penalties for the shelter, including being forced to pay for the time of each firefighter sent to enforce compliance, Matthews said.

“Until now, we'd been in conversation,” Rev. Matthews said. “This was the first direct order.

"But are people really safer on the street than inside the building?”