Arguments address the protest's impact on other events, possible damage to art and the homeless population at camp. 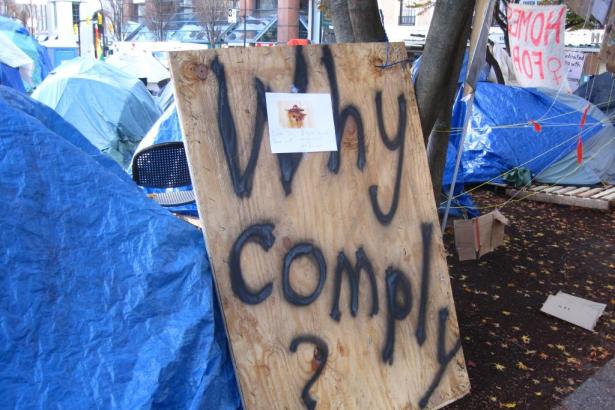 A sign reveals some protesters' opinions on city orders. Photo by Alexis Stoymenoff.

After yesterday’s Supreme Court hearing ended with little progress, lawyers representing both sides continued to argue their points in the City’s application for an injunction to remove tents from the Art Gallery plaza.

Other public use of Gallery grounds

The City outlined their application on the grounds of trespass, specifying that Occupy Vancouver is currently – and intends to continue – preventing others from using the site. Parkin listed a number of groups who had applied to use the site for special events, even other protest groups he said are being forced to make other plans.

“For all intents and purposes, the entire plaza is completely occupied,” said Parkin, suggesting that Occupy Vancouver is actually preventing other protests from using the space.

This argument earned a number of thumbs-down hand gestures from the gallery, and an objection from Occupy Vancouver lawyer Jason Gratl.

Later in the afternoon, Gratl responded to what he called an “implicit suggestion” that Occupy Vancouver is incompatible with other events. Referring to the City’s list of upcoming events scheduled to occur at the site, he noted that Occupy’s “community inclusion committee” had made significant efforts to reach out to the groups involved.

Acknowledging the potential for disagreements over use of the space, Gratl said the protesters “have created a committee to deal with precisely that issue.”

He brought up two well-known events – the AMACON Christmas Tree Lighting ceremony, which has been moved to the Vancouver Convention Centre and the recently re-routed Rogers Santa Claus Parade.

According to Gratl, so far none of the scheduled events have been cancelled and there has been no suggestion that new or adjusted locations are “in any way less desirable” than the Art Gallery.

The City’s lawyer also raised concerns over “unruly behaviour” and health and safety at the camp – despite attempts by Occupy Vancouver to comply with the Fire Department’s safety regulations. These concerns include reported violence, drug overdoses, rodents and deteriorating conditions around sanitation.

Parkin stated that people inside Occupy Vancouver agreed such problems exist, but that “there is no mechanism for them to deal with the problem” because of the system in place that is based on free will.

Defense lawyer Michael McCubbin later took the stand with arguments about the issue of homelessness in Vancouver, citing an informal survey of the camp that counted approximately 26 homeless people currently living at the site. Interviews with several occupants revealed a general sense of safety and community there, which many say is not available at shelters in the area.

He referred to multiple city reports and affidavits on homelessness, including one that showed a trend for homeless people to avoid shelters and opt to sleep on outdoors instead.

“The City’s shelters are so insufficient that people would rather sleep on the street,” said McCubbin. “And in a city as wealthy as Vancouver, that’s a troubling result.”

The city lawyer’s father, Andrew Parkin, who was watching the hearings from the gallery, said the lack of shelters was a valid concern but perhaps not a strong argument for the protest.

Since one of the newly added defendants on the case is a homeless woman, McCubbin spent a significant amount of time going over the lack of women-only shelters, the dangers for women on the street and reasons that women are sometimes forced to leave their residences. However, it is worth noting that only four of the 26 homeless people counted in the survey at Occupy Vancouver were women.

McCubbin held that the bylaw prohibiting tents on the Gallery plaza was constitutionally suspect and overly broad, limiting the rights of homeless people by including their last-resort shelters in the list of prohibited structures. He said that granting an injunction to enforce such a bylaw would force homeless campers at Occupy Vancouver back onto the streets or into dangerous, unsuitable shelters.

As such, Occupy Vancouver lawyers maintained that the bylaw should be litigated on its merits, noting that this case never gets to court because those most affected – the “marginalized and vulnerable” – don’t often have the resources to bring it to trial.

Regarding the “constitutionally suspect” bylaw, Gratl proposed an expedited trial to address constitutional issues beginning in early December. The difficulty, he said, was in what to do between then and now, particularly regarding the homeless occupants at the encampment who will have nowhere else to go if an injunction is granted.

The City is seeking an enforcement order to authorize police to clear the area and remove tents, as well as authorization to arrest anyone not in compliance or obstructing enforcement. While the hearings have seemed to drag on over the past two days, all parties have said they wish to see an end to the current application by the end of Friday – just one day before voters head out to vote in the civic election.

“I’m concerned about finishing tomorrow,” said Madame Justice MacKenzie, encouraging counsel to abbreviate their arguments and proposing an early start for the day.

The final day of this week’s injunction hearings will begin at 9:30 a.m. Friday.