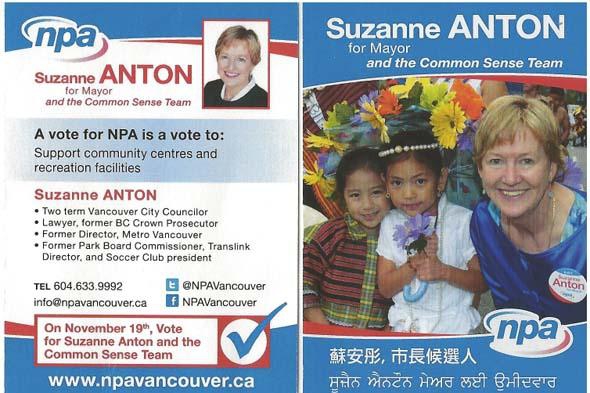 This image was distributed this weekend at Filipino events attended by NPA's Suzanne Anton.

The move came after the children's parents expressed their outrage.

But critics are questioning whether it was a simple mistake, as Anton claimed – and are accusing the NPA of “political opportunism” around minority voters and of disregarding their community's needs.

“It definitely has racist tones to it,” said Charlene Sayo, former executive director of the Philippine Women's Centre of B.C. “But I'm more concerned that it was political opportunism and the exploitation of children. You would ask parents, that's a no-brainer.”

“If (politicians) want to be authentic, they should really be meeting with community organizations. I want them to address the issues of domestic workers and their families, live-in caregivers and even child-care, that would show that they are at least concerned and interested in our issues.”

The issue came to the attention of the Coalition of Progressive Electors (COPE) Sunday after one of its members saw the photograph of Anton posting with the woman's nieces – Ella Belgica, 5 and Gabrielle Mojica, 6 – at a community event. She discovered that neither child's parents had been asked for consent or even knew the photographs had been taken in the first place. Anton said her campaign had made a mistake, and that she had apologized to both families.

“I take responsibility for it,” Anton told the Vancouver Sun. “It was done, I would say, thoughtlessly. People take a lot of images and they get used — it was the wrong thing to do to use the images of kids without getting their information [and consent].”

But the COPE member related to the children said that an apology is not enough – and that the family is exploring its legal options.

“The parents are so upset,” said Bootz Estella, an aunt of the children, who denied that Anton had contacted both families or taken responsibility for the mistake. “I was there when Anton called – I was listening on a speakerphone. She said, 'I'm very sorry, it was one of my staff; I was not fully informed.' How would you not be informed? It's your face.

“An apology is not enough – our family feels disrespected. I don't think they have respect for other communities.”

Meanwhile, COPE city council candidate R.J. Aquino – who is himself Filipino -- told the Vancouver Observer that the NPA's misuse of children's images touches a nerve of many parents concerned not only with the privacy of their families, but also not being taken advantage of during an election campaign.

“I'm a new dad myself,” he said. “Putting myself in the parents' shoes, I'd be outraged too if my children's images were being used without my permission – especially for a political campaign.”

“It's just common sense,” Aquino added, inadvertently using one of the NPA's campaign catchphrases. “It would be irresponsible for me to make any assumptions about what their intentions are, but what's clear is they certainly made a mistake. I'll allow people to connect the dots – they were handing this out at a Filipino event, there's Filipino children on the image.”

“If it's an attempt to appeal to the Filipino community, these are its impacts – not clearly thought out.”

It is unclear who directed the creation of the campaign materials with the children's images. For its marketing research and campaign, the NPA employs Campaign Research Inc., the company renowned for Toronto Mayor Rob Ford's surprise election victory last year. That campaign was famous for its populist anti-establishment slogans -- “Stop the gravy train,” for instance – criticisms of social services, and in at least one case, replying to a voter inquiry with the generic form response: “Insert vague response on policy.”

The Vancouver Observer unsuccessfully attempted to reach NPA park board candidate Gabby Kalaw, also a member of the Filipino community, or a spokesperson for comment.