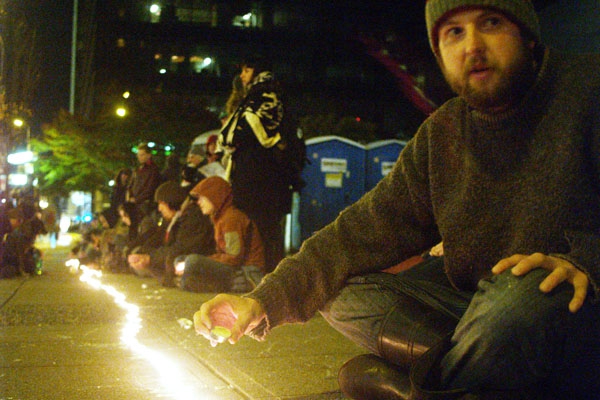 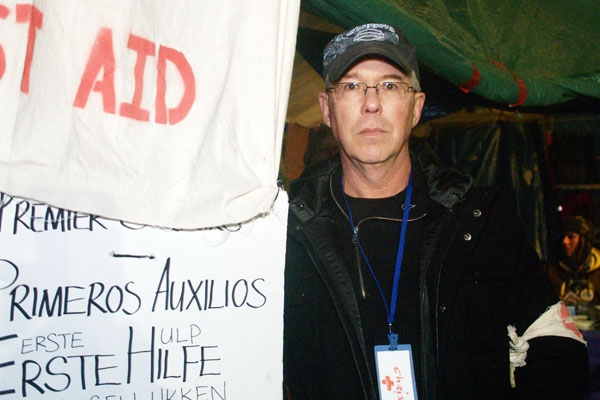 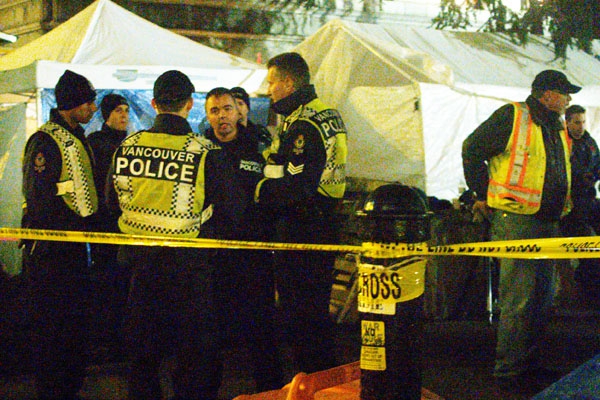 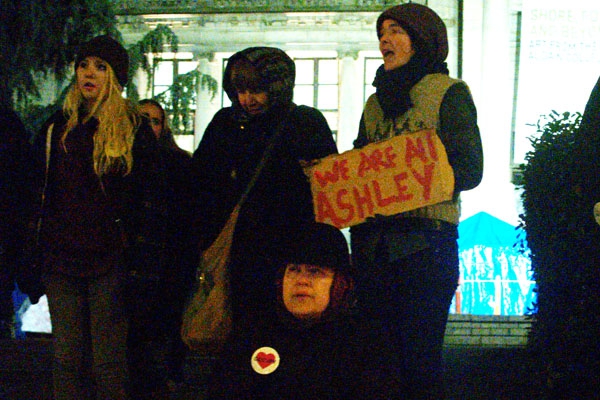 Occupy Vancouver medic Chris Shaw was the first-responder on scene, and unsuccessfully attempted first aid on the deceased woman. Within hours, protestors began a vigil on Georgia Street. Photo by David P. Ball

A candle-light vigil -- with signs reading "We are all Ashley" -- was held in front of the art gallery, as Occupy Vancouver protestors mourn the death of a woman in her 20s who died of a suspected drug overdose Saturday at the camp. The BC Coroner service confirmed the woman's identity on Sunday as 23-year-old Ashlie Gough, from Victoria.

Only days after protest medics saved the life of an overdose victim on Thursday, counsellors from Insite supervised injection site arrived to discuss preventing similar situations in the future. But protestors defended their camp, saying the death is symptomatic of everyday societal problems.

"I have directed the city manager to expedite the appropriate steps to end the encampment as soon as possible with a safe resolution being absolutely critical to that," Mayor Gregor Robertson said.

"I wish we'd gotten there earlier," said Chris Shaw, an Occupy Vancouver medic who was the first-responder today, who said he believes the death was caused by a drug overdose. "We were there in 10 seconds -- literally 10 seconds."

The suspected overdose -- identified as such by several witnesses but not yet confirmed by authorities -- comes only days after a near-fatal heroin overdose at the camp on Thursday, in which protest medics managed to save the man's life with CPR. But Shaw, a certified first aid provider trained in the military, said that the incident could have happened anywhere in the city -- where first-responders would not be so fast.

"Was it wrong for us to feed people and house them?" he asked, hugging a friend after a tense evening at the camp, where police have cordoned off an area of the tent city and Mayor Robertson heeding calls to close down the camp. "There were 120 overdose (deaths) in the city last year."

"Here, we have medics on site at all times. What happened here could have happened anywhere. We did save someone last week."

Lauren Gill, a professional drug and alcohol counsellor staying at Occupy Vancouver, said that the incident is a tragedy that should not be made into an excuse to close down the three-week old protest camp.

"Now our movement needs healing and to give people time to grieve," Gill said. "Our thoughts are with Ashlie and her family. But we saved a man's life last week."

Gill described the 20-something woman as "a bright, energetic, beautiful, kind, passionate, artistic youth" whom she has known for several years.

Another camper said the incident is reflective of Vancouver's drug addiction crisis, not Occupy Vancouver, a protest against the very economic and political system that creates the conditions for drug addictions.

"This is tragic," said Danielle Lee Williams in front of a line of police tape and firetrucks at the art gallery. "This is a member of our community we have just lost."

"I would stress that five to seven people overdose every day in Vancouver -- where people are alone. It affects us daily. But here on site we have community all the time for support."

In the face of the loss -- and mounting calls on Twitter and in the media to shut the camp down as a safety hazard -- Mayor Gregor Robertson announced he would seek an immediate peaceful end to the camp. However, Williams said the death reinforces protestors' resolve to stay.

"We need to keep working and building so that this doesn't happen again if possible," she said. "If they shut it down right now, it's not going to prevent this from happening."

"I don't want to politicize this -- this is a loss, not a problem with the Occupy movement," she added. "But we need to address systemic change for members of our community. It's reinforced the need to stay here today."

The victim was taken away by ambulance at 4:40 p.m. Two hours later, renowned punk band D.O.A. (which, coincidentally, stands for "dead on arrival") was scheduled to play at the tent city. After some discussion of whether the concert should happen, the camp decided to continue. D.O.A. played a cover of Guns'n'Roses' song "Sweet Child of Mine," the video for which depicts a child who dies of a heroin overdose. The mood in the camp was sombre, with some participants debating next steps and others simply listening in silence. A memorial was set up near the camp, with vigilers lighting a line of candles along the sidewalk off Georgia Street and singing songs.

Meanwhile, an emergency meeting of core Occupy Vancouver volunteers discussed responses to the death. There are calls within the camp to invite Insite safe injection nurses to the camp, however reportedly a staffperson at the organization said it would need an exemption from the police to do their work, a camp volunteer said on condition of anonymity.

"This is why we need Insite in society," said Gill, who works in a mobile drug counseling van.

Shaw agrees, admitting that changes are urgently needed at the protest camp, despite the fact that such incidents happen in Vancouver regularly.

"She would have died in an alley and no one would have even tried to save her," he said. "We are going to learn from this and do better." He would like to give camp medics more roles in monitoring the health of campers within the tent city to anticipate problems, but that decision would rest with the larger group.

Other campers agreed, and said if the city attempts to shut down the protest, they will defy orders to leave.

"This is a better, safer shelter than any other shelter in the city," said Occupy participant Blaine Komatic. "That's why people are here -- shelter, education, free food. Nothing that happened here is a product of this movement."