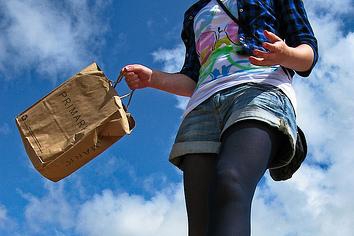 Canadians are less confident about their finances than they were two years ago, according to the October Consumer Outlook Index survey released today by the Royal Bank of Canada.

TORONTO - Consumer confidence has dipped to its lowest level in nearly two and a half years, according to a report by the Conference Board of Canada.

The 3.3-point decline in October puts the think tank's confidence index at 71.8, nearing the sentiment reached in 2009, when Canada was in the middle of its biggest recession in decades.

The index is measured against a reading of 100 in 2002, when consumers were extremely confident about the state of their finances.

The drop overshadows a slight rise last month. It was also the fifth decline in the last six months and the lowest level for the index since May 2009.

A survey released Wednesday by the Royal Bank of Canada also pointed to a sharp drop in consumer confidence.

Both surveys come as Canadians grapple with rising prices for gasoline, food and clothing, record debt loads as well as stock market turmoil and signs of slowing overall economic growth.

"The drop in the RBC Canadian Consumer Outlook Index reflects ongoing global economic uncertainty, showing that strong Canadian economic fundamentals insulate us but do not make us immune to the turmoil around the globe,'' said Craig Wright, senior vice-president and chief economist at RBC.

"Given the uncertainty, the drop in the index was not unexpected, though it was disappointing.''

Consumers surveyed in the Conference Board survey showed a surprising level of optimism about future job creation, but that was not enough to buoy their overall confidence, the board said in its report released Wednesday.

"The balance of opinion on whether now is a good time to make a major purchase fell to its lowest level since early 2009,'' it added.

Consumer confidence in Ontario and B.C., where rapidly rising home prices are eating up a bigger portion of household income, declined the most, by seven points or more. Meanwhile, consumers in the Prairie provinces indicated improved confidence, resulting in an index reading of 97 points, the board said.

This month's survey was conducted between Oct. 6 and Oct. 16. The margin of error is plus or minus 2.2 per cent.

Economists watch consumer confidence closely because consumer spending accounts for more than half of overall economic activity. However, it can be an unreliable indicator because it relies on what people say about their intentions rather than their actual behaviour.

For example, data released from Statistics Canada Tuesday showed that retail sales surprisingly improved by 0.5 per cent to $37.8 billion in August even as the confidence index that month fell to its lowest level in two years.

Consumers are edgy about signs the world economy could sink back into another recession, which would put pressure on household finances and incomes. That could spell trouble for Canadians who have taken advantage of record low interest rates since the recession to amass record levels of personal debt.

Meanwhile, the Royal Bank survey suggests that more than half of Canadians have no savings set aside for a rainy day and many who do dip into them to help pay for everyday expenses.

The October RBC Canadian Consumer Outlook Index found that 57 per cent of Canadians didn't have money set aside for emergencies. Three in 10 respondents said they had used their savings for either everyday expenses or emergencies.

However, the survey also suggested that Canadians are "very focused'' on finding ways to manage their finances. Over the next 12 months, 33 per cent said they plan to reduce their debt, 30 per cent intend to spend less, 21 per cent expect to save or invest more and 21 per cent plan to do all of the above.

RBC's confidence index was at 70 points, down 24 points from last quarter.

Economists, including Finance Minister Jim Flaherty and Bank of Canada governor Mark Carney, have been warning for months that Canadians have ben racking up more debt than they can sustain, as a long period of ultra-low interest rates and sluggish price inflation have combined to create easy borrowing conditions.

And the central bank hinted Tuesday that it will need to keep interest rates super low for an extended period to stimulate an economy being battered by a sharp global downturn and rising risks. As expected, the target overnight rate was left at one per cent.

In an pessimistic new forecast of future expectations for economic growth, it gave every indication that Canadians can bank on lending conditions staying "stimulative'' well into the future.

The RBC CCO survey was conducted online by Ipsos Reid and involved data collected between Sept. 26 and Oct. 3 from 3,054 Canadians across the country. Pollsters consider it accurate within plus or minus 1.65 percentage points 19 times out of 20.