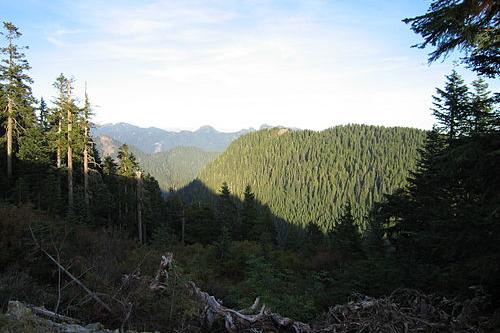 Photo by ChrisStubbs via Wikimedia Commons

Michael St. Laurent, 45, was found along the backside of Grouse Mountain by an off-duty search and rescue team member Saturday.

With a modest amount of gear, St. Laurent survived with rain water, little food and suffered hip and knee injuries after an Oct. 13 fall.

VANCOUVER - A short, planned hike over to the remote side of a popular British Columbia mountain turned into a nine-day, near-death experience for a North Vancouver man who was rescued Sunday by chance.

An off-duty member of North Shore search and rescue accidentally found Michael St. Laurent on Saturday in the wild bush along the backside of Grouse Mountain, north of Vancouver.

The 45-year-old had hip and knee injuries, suffered after he slipped and fell while trekking alone on Oct. 13.

"He was a bit delusional as to things he had heard and seen because of the extreme weather conditions he was in,'' said Cpl. Richard De Jong in an interview Sunday, describing the man's condition when he was discovered.

The man survived on little food and rain water.

Staff at the destination hiking locale spotted St. Laurent's car in the parking lot on the evening of the day he set out. But it was unclear if he had actually headed into the trails, so police listed him as a missing person. No reports of his disappearance were made by family.

Volunteer search crews set out looking for the man by foot and helicopter several days later, with no sightings. Other hikers may have even passed by the area, taking no notice of the man in his weakened state.

But on Saturday evening, one member unexpectedly found him about a nine hour hike around the backside of the mountain.

"They weren't even intentionally looking for him, they just came across him on their own time,'' said De Jong.

The man had no cellphone with him but was carrying a tarp, having plans to spend no more than a day or so in nature, said De Jong.

"He's very fortunate that he had some equipment with him to stay out of the elements, although at this time of year the temperatures are dropping in the mountains,'' said De Jong.

Two rescuers gave the man first aid and camped with him overnight until a helicopter could retrieve him at first light Sunday. He was taken to Lions Gate Hospital.

"He took to an area that is not frequented a lot,'' De Jong said, explaining St. Laurent was located in the Hanns Valley area.

He was suffering dehydration, hypothermia and frostbite to his toes, but is expected to make a full recovery.

The scenario presents an opportunity to remind the public to always tell someone where you're going when heading into the backcountry, including your expected date and time of return, added De Jong.

"The situation showed if we don't know where you are, we can't come looking for you.''