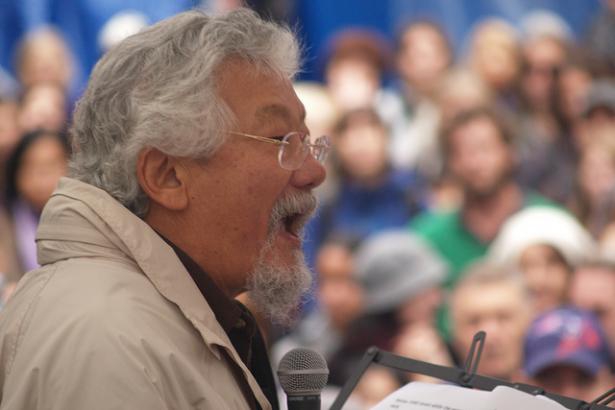 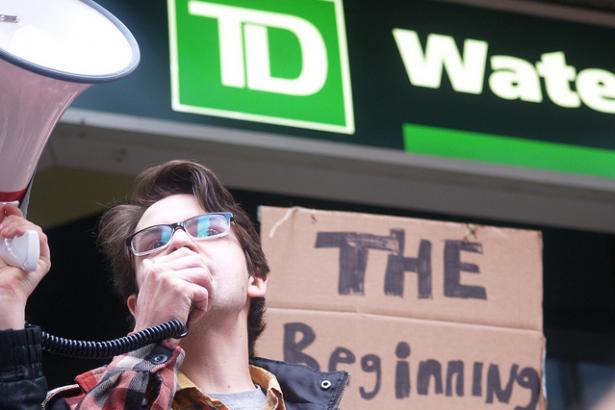 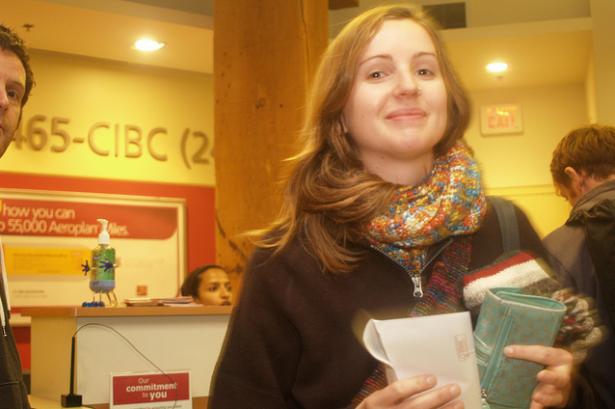 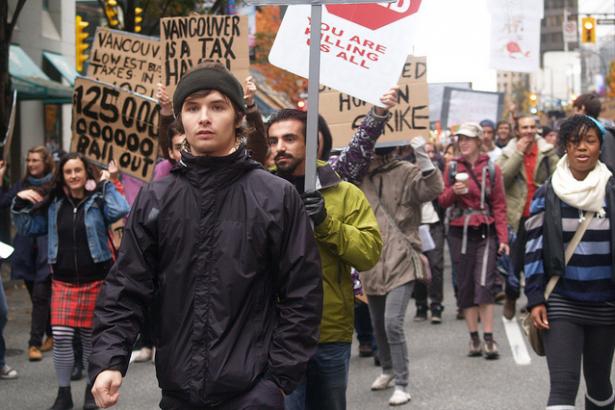 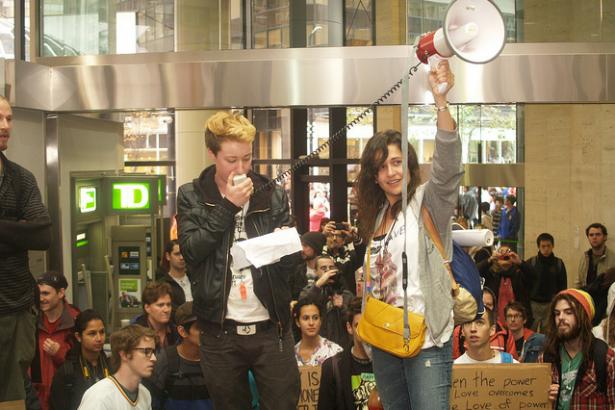 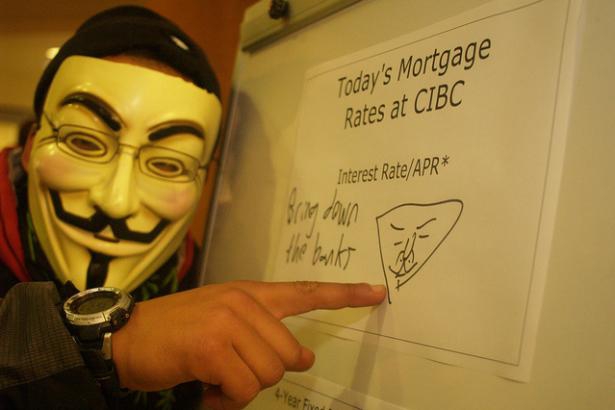 The lyrics blasted suddenly over the Canadian Imperial Bank of Commerce (CIBC)'s in-house sound system: "F*** you, I won't do what you tell me."

If the Rage Against the Machine sound-blast and accompanying dance party were any indication, Saturday was no ordinary banking day in Vancouver.

Exactly one week after the Occupy Vancouver encampment set up at the Vancouver Art Gallery, and with some expressing frustration that the movement needs to take more concrete and direct action to confront economic elites -- or, in Occupy-speak, the "one per cent" -- the 'run on the banks' event followed a highly anticipated speech by broadcaster David Suzuki at the art gallery.

"Capitalism, economies, corporations, markets, currencies -- these are not forces of nature, we invented them," Suzuki told the crowd of at least 2,000. "And if they don’t work, we can and we must change them."

Suzuki -- a member of the Order of Canada voted the fifth "greatest Canadian" in a 2004 poll -- said that corporations have become larger and more powerful than most governments in the world, and consequently are no longer bound to laws and standards around the environment, human rights or labour laws.

Roughly 350 demonstrators from Occupy Vancouver marched against what they say are 'corrupt' and 'greedy' Canadian financial institutions, culminating in a boisterous take-over of a Toronto Dominion (TD) branch, with dancers on teller counters and a half-hour sit-in ending with no arrests. Nearly a dozen clients closed their accounts at four banks in protest.

"I'm against how my bank has been investing our money -- primarily in oil companies," said Nahum Mann, a charitable fundraiser who closed his Royal Bank of Canada (RBC) account as part of the day of action. "I'm in the process of removing myself from the grid. It's a start and I hope others follow."

The "run on the banks" comes at the end of a week in which Occupy Vancouver has transformed itself from a handful of tents and meandering discussions around decision-making, into a makeshift village of more than 100 tents on platforms, a covered movie-theatre, free food tent, medic centre, media booth with computers and wireless internet, and daily organizing meetings. A healing arts space, with massage and other alternative health care, is rumoured to be in the works.

The week also saw visits from other celebrities, including Rage Against the Machine's Tom Morello (who gave away hundreds of free tickets to his concert Wednesday) and rogue Parliamentary page Brigette dePape, as well as candidates from every party in the upcoming civic election. The camp has become an election issue, with Mayor Gregor Robertson announcing that, for now, it will be allowed to continue, and rival Suzanne Anton accusing him of mismanaging the situation.

Chanting 'They got bailed out, we got sold out,' a popular Occupy Wall Street slogan, as well as 'Close down the banks,' the noisy demonstration snaked haphazardly through downtown, seeking open bank branches. Deliberately choosing the largest Canadian banks, targets included RBC, CIBC, Bank of Montreal and TD.

"I closed my account because I want my money in my community, not used to elevate the elite even further," said Rachel Hinds, who left a CIBC teller wicket with a thick envelope of cash from her account, which she closed after being a client for six years. "(Challenging banks) is essential to taking back our communities."

Tech-savvy protestors accessed the sound-systems in several of the banks, playing loud music while others danced, gave speeches and attempted to close their accounts.

"We want all of the money they have stolen," said one speaker in CIBC. "They call it the Canadian Imperial Bank of Commerce -- well, we're here to bring down the empire. It's our money, and we have the right to take it out."

The confrontation caused one CIBC teller to break down in tears after account closures were at first refused, and police in helmets moved in. However, the tellers finally allowed clients to close their accounts.

The rally then took over the TD branch immediately adjacent to Occupy Vancouver's encampment at the art gallery, with some hoping to stay the night and others wishing to avoid arrest and leave. In the end, after a heated discussion, most of the group left, and 11 people staged a sit-in, which ended after more than half-an-hour with no arrests and cheers from the crowd outside.

"We chose to leave on our own terms," said sit-in participant Captain Sweep, who said he was facilitating a workshop on communication skills in the bank as the larger crowd left and his workshop participants elected to stay. Police officers refused entrance to members of the media, despite press credentials.

"We wanted to show that we can actually do that (take over a bank) -- and we are right to do so."