Lawyers press for Bush arrest, as #Occupy activists set to converge in Surrey 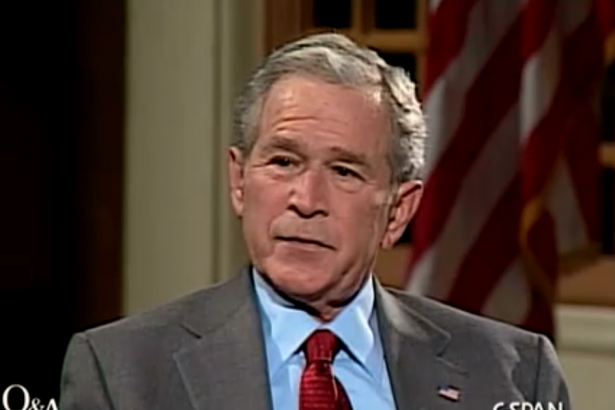 “Once BUSH is present, if no extradition is sought, the Canadian authorities are under a positive legal obligation to investigate BUSH and submit the case for prosecution.”

Thus concludes a 70-page legal indictment -- accompanied by a staggering 4,000-page dossier -- which will be filed in a Surrey, B.C. courtroom tomorrow to have former U.S. president George W. Bush arrested during his visit to the city.

The allegations, submitted in late September to Canada's attorney general by U.S. and Canadian rights law organizations, call for the former U.S. president to be charged with torture and war crimes alleged to have been committed during his time in office. Four plaintiffs -- Hassan bin Attash, Sami el-Hajj, Muhammed Khan Tumani and Murat Kurnaz -- say they were tortured by the U.S. at Guantánamo Bay prison and in Afghanistan.

Bush -- along with former president Bill Clinton -- will be in the Lower Mainland speaking at the Surrey Regional Economic Summit. But with Amnesty International demanding his arrest and #OccupySurrey announcing demonstrations, chaotic scenes like those during former vice-president Dick Cheney's visit last month -- when police roughed up sit-in protesters and one demonstrator was arrested for assault -- may be in the works.

“When WAR CRIMINAL Bush comes to Surrey October 20th,” announced Twitter group @OccupySurrey last week, “we will meet him with a FLASH OCCUPATION. Expect us.” The group said it is meeting at 9 a.m. at the Vancouver Art Gallery before traveling to Surrey tomorrow.

Meanwhile, the  world's largest human rights organization, claiming three million members in 150 countries, put its weight behind the campaign last week. Amnesty International says the 1987 Convention Against Torture – to which Canada is a signatory -- allows and even requires members to enforce international law.

“The evidentiary record is crystal clear,” Alex Neve, executive director of Amnesty International Canada, said in an interview with Vancouver Observer. “He made policies which unleashed a range of serious rights violations, including torture. The range of violations are at the level of war crimes.”

“They constitute crimes against international law. Bush should be held accountable for his policies.”

Surrey mayor Dianne Watts – who chairs the organization behind the economic summit Bush will address – defended her invitation of the former president.

“This isn’t a political event, it’s an economic summit,” she told The Surrey Now newspaper. “It’s not about whether you like an individual, it’s about having a dialogue.”

“If you only deal with one side, you’re not learning the other half of the equation.”