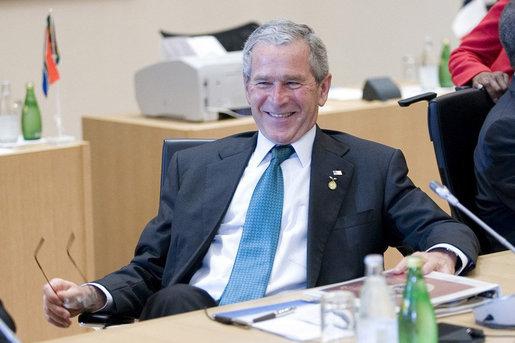 Last month, similar groups and politicians called for the arrest of former U.S. vice president Dick Cheney when he visited the Vancouver Club.

"It is incumbent upon Canadian officials to investigate, arrest and prosecute former president Bush for torture when he arrives in Canada a week tomorrow,'' said Alex Neve, Amnesty Canada's secretary general.

Bush and former president Bill Clinton are scheduled to attend an economic conference in Surrey, B.C. next week.

Neve said many will argue that arresting Bush is unrealistic because the United States is a close and powerful ally or that the crisis after 9-11 required extraordinary measures.

"None of those arguments justify inaction under international law,'' he said. Neve conceded that arresting a former president would likely cause tension with the United States, but "taking a principled step merits that sort of strain.''

Neve said Bush admitted in his memoirs that he authorized the use of torture against terror suspects.

"All of this was authorized and condoned and put in place through his own repeated decisions.'' Neve said the international arm of Amnesty sent a lengthy brief to Justice Minister Rob Nicholson outlining the government's responsibilities under international law and urging him to act.

"This is something the entire global movement stands behind,'' Neve said.

Nicholson's office did not respond to a call for comment on Amnesty's demand.