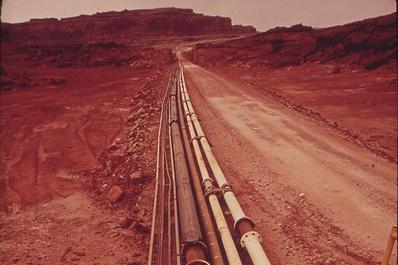 The Associated Press has the story:

The lawsuit, which the groups planned to file Wednesday in federal court in Omaha, seeks a halt work on TransCanada's (TSX:TRP) Keystone XL pipeline, which would carry crude from the oilsands of Alberta to Texas Gulf Coast refineries. It alleges that the U.S. Fish and Wildlife Service allowed the pipeline operator to prematurely disrupt the environment.

The groups planned to discuss their lawsuit at a news conference later Wednesday in Omaha.

The Keystone XL project has not yet received U.S. State Department approval. But the lawsuit says federal officials have already authorized TransCanada to mow native grasslands along the route and relocate American burying beetles, an endangered species.

The plaintiffs, the Center for Biological Diversity, the Western Nebraska Resources Council and Friends of the Earth, say TransCanada has cleared a 160-kilometre pipeline corridor through the Nebraska Sandhills, despite a federal law that prevents the launch of projects before they receive approval.

They also say the decision to allow the groundwork is a sign that federal officials aren't committed to the full, legally mandated review. U.S. State Department officials held public meetings last week in Montana, South Dakota, Nebraska, Kansas, Oklahoma and Texas, where the pipeline would run, and have defended the process as fair.

"The State Department has further confirmed that it is running a corrupt review process by giving TransCanada a green light to begin construction,'' Erich Pica, president of Friends of the Earth, said in prepared remarks. ``It makes a mockery of the public and sends a message to Nebraska that their concerns don't matter. If the State Department was truly doing its job, this lawsuit wouldn't be necessary.''

Pipeline supporters point to a U.S. State Department study and some Nebraska water experts who claim any spill in the aquifer would have a limited impact. The pipeline would carry an estimated 700,000 barrels of oil a day, doubling the capacity of an existing pipeline from Canada, and business groups and unions have welcomed the project as a job-creator that will reduce dependence on Middle East oil.

But the pipeline has drawn opposition from an unlikely coalition of Nebraska farmers, ranchers, environmental groups and other activists who fear it will leak and contaminate the Ogallala aquifer, which supplies drinking and irrigation water to eight states.

Supporters and top TransCanada executives have said the criticism is baseless, and an attempt to stir fears.

Nebraska State Sen. Annette Dubas circulated a bill this week that would give state authorities the power to relocate the pipeline around the aquifer. Dubas and several other lawmakers are pushing for a special legislative session to address concerns over the pipeline's route before the State Department's expected decision in December.

Gov. Dave Heineman has said he supports the pipeline but opposes the route. The Republican governor has declined to call a special session, citing a lack of legislative support, and he questioned whether the state can supersede federal law, despite U.S. State Department assurances.

The lawsuit contends that many Nebraskans who oppose the project cannot speak publicly out of fear for their job prospects and professional relationships.

The lawsuit names the U.S. State Department, Secretary of State Hillary Clinton, Secretary of the Interior Ken Salazar and the U.S. Fish and Wildlife Service as defendants, because of their oversight roles. TransCanada is not named as a defendant.