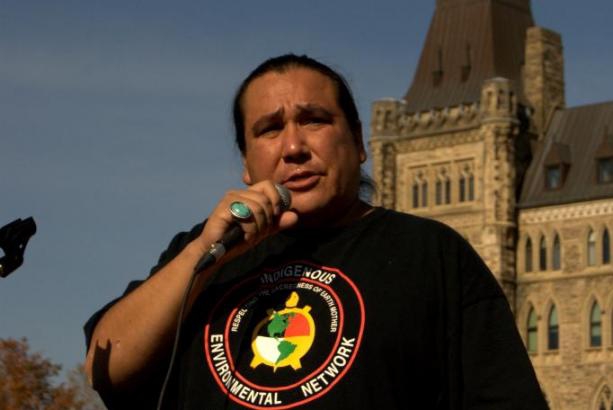 Among the crowd gathered early on Parliament Hill, Andy Clarke stands out.

It’s not his clothes or his hair. It’s his age. Clarke is 84 years old and in the next two hours he might be handcuffed and arrested for protesting.

Clarke is one of hundreds of people who rallied on Parliament Hill Monday morning to protest the Keystone XL project. Many worry that expanding the existing Keystone pipeline system, owned by TransCanada Corp., would require rapid expansion of the Alberta oil sands and further environmental and health issues for those living nearby.

“Already, people are dying,” said Julie Burke, co-chair of the Keepers of the Athabasca Watershed Council.

“In the past, people used to die of old age in the communities. Now it’s all cancer-related.”

This is Burke’s first protest. She came on behalf of First Nations in the Athabasca region of Alberta, where the oil sands are located, and says that already her community is feeling the impact of living directly downstream.

“There has been one death in the past five years that has been from old age,” Burke said. “All the deaths in the communities are cancer-related. It is going on every day. People are losing their loved ones, their children.”

“We’re here to say no,” she said firmly.

Official RCMP estimates this morning put the crowd at around 400 people. Of that, 117 were arrested after climbing over the barricades set up by police between the front lawn of Parliament Hill and the main stairs leading to the foyer. 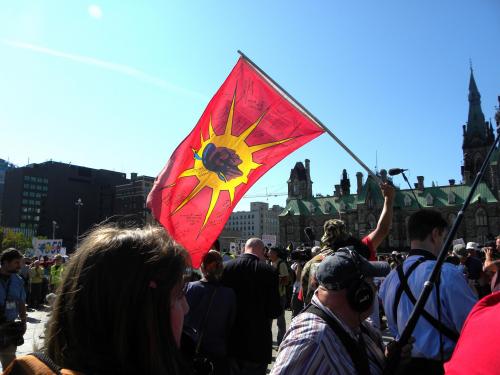 George Poitras was one of the first people to be arrested. A member and former chief of the Mikisew Cree First Nation, he said he is disappointed that his community, located in the heart of the Alberta oil sands, needs to struggle to have their voice heard.

“In this moment in history, that I have to be here to risk my liberties is, I think, a very sad commentary on society today.”

Poitras was one of the first demonstrators to cross the police barricade and be arrested. He was given a $65 ticket for trespassing, banned from Parliament Hill for a year and ordered to appear in court.

“When I first got arrested and handcuffed and escorted away, it was pretty emotional,” he said. “A lot of things went through my mind, in terms of being an indigenous person from Alberta, from the most impacted area from the tar sands.” 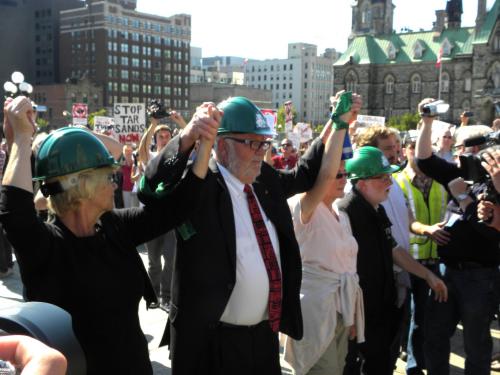 Dave Coles, president of the Communications, Energy and Paperworkers Union of Canada, was also one of the first to be arrested. He says he just can’t understand the Harper government’s rationale for allowing the Keystone XL expansion to go forward.