Is the "Harper Government" just beginning to rebrand Canada?

First it was the prime minister's name on all official announcements. Now critics worry that a broader move is afoot to "redesign" the government. 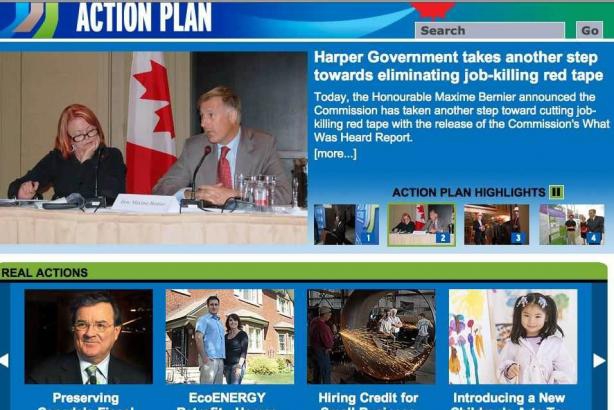 The public and opposition politicians reacted badly when the phrase "Harper Government" began popping up on regular government announcements before the last election, and the prime minister's office denied he had ordered the move.

But new documents indicate their was such a direction -- and that the political rebranding of the Canadian government may have only just begun.

OTTAWA -- Despite Conservative assertions to the contrary, a directive did go out to some civil servants last fall ordering them to use the term "Harper Government'' in official government of Canada communications.

Documents obtained by The Canadian Press contradict a published denial by Dimitri Soudas, Prime Minister Stephen Harper's former director of communications, who wrote "nothing could be further from the truth.''

"Since when have we started making announcements as the 'Harper Government'?'' Daniel Morier, Health Canada's chief of social media, asked in an internal email on Nov. 30, 2010.

Morier also passed along the following inquiry: "Why is (at)healthcanada creating partisan 'press releases' and marketing them as non-partisan ministry news?''

Erin Junker, a senior communications adviser at Health Canada, responded by email: "This was a directive I received from PCO.''

The Privy Council Office, or PCO, is the bureaucratic nerve centre that serves the prime minister, working in concert with the Prime Minister's Office.

A PCO spokesman responded to a series of questions Wednesday about the Health Canada email exchange by reiterating that "there has been no change in policy or direction.''

Raymond Rivet said in an email that he "cannot speculate'' on what directive Junker was referring to: "There may have been instances where the term was introduced but, as I have said, there was no formal directive to use the term Harper Government.''

Rivet did not respond to a question about who "introduced'' the term, or why.

And Junker-- although herself a senior communications person -- referred direct questions to a Health Canada media spokesman.

"There has been no directive from PCO to use the term 'Harper Government,''' wrote the departmental spokesman.

Soudas, who retired this week after nine years as a principal spokesman for Harper, sent a letter to media outlets across Canada last March calling The Canadian Press story "speculation and unsubstantiated innuendo ... nothing could be further from the truth.''

His denials reflected the unexpected public outrage that greeted the revelation about non-partisan civil servants being directed to use "Harper Government'' on departmental releases in the months leading up to the spring 2011 election campaign.

The story appeared to galvanize public perceptions of an aggressively partisan Conservative administration trampling the admittedly grey area between party and the non-partisan public service.

Non-partisan departmental web sites switched to a Tory-blue motif soon after the Conservatives took power in 2006, and taxpayer funded Economic Action Plan website, signs and ads have blanketed the country since 2009 in a "whole of government'' exercise that is indistinguishable from the partisan Conservative pitch.

And the remake of the Government of Canada brand has only begun.

This summer, PCO posted a public notice of "Proposed Procurement'' for new design concepts for Government of Canada advertising.

"PCO is seeking to develop a 'whole of government' branding approach that increases the public resonance and recall of government messages and information,'' says the proposal.

It calls for bids to alter the "voice overs, sound bugs, music, colour schemes, taglines, vision icons'' of government advertising in everything from the Web to TV and radio.

"The new graphic designs must be fresh, dynamic, inspiring and representative of the Government of Canada,'' says the proposal from PCO.

Some critics say they're alarmed to see any partisan rebranding of what should be the scrupulously non-partisan machinery of government.

"There's a serious issue here and it's a deeply corrupting one for the public service,'' says Ralph Heinzman, who teaches public administration at the University of Ottawa.

The former senior civil servant spent five years overseeing the Government of Canada's communications policy and helped rewrite it, then headed the office of Values and Ethics in Treasury Board -- which oversees all civil servants.

Heinzman was awarded the Vanier Medal in 2006, Canada's highest recognition for public administration for his work in the areas of ethics and citizen-centred service delivery.

His assessment of the "Harper Government'' label is scathing.

"I would say that any public servant who's involved in communications activities of that type is in breach of both the Communications Policy and the Values and Ethics Code,'' Heinzman said in an interview.

"And any deputy minister who directs or permits public servants to be involved in those activities is in breach of the Values and Ethics Code.''

Asked about Heinzman's concerns and his reading of the public service code of ethics, PCO did not respond.

Treasury Board, which oversees the code, appears unconcerned as it too is using 'Harper Government'' in news releases, including one this week.

Treasury Board officials have argued that since the use of "Harper Government'' is not expressly forbidden in the long-standing civil service communications policy Heinzman helped write, there is no rule against the practice.