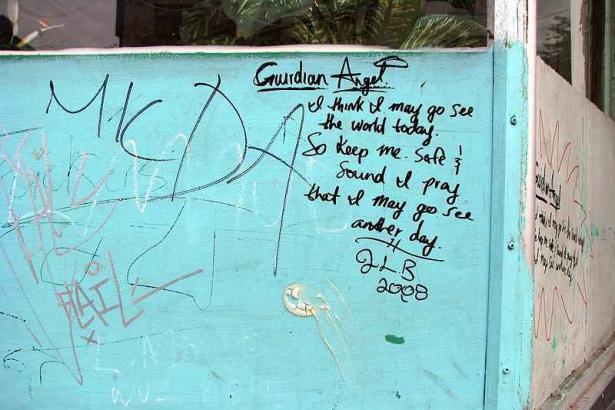 Photo of poem on wall in Downtown Eastside courtesy of Wikimedia Commons.

The number of official participants who say they won't participate into an inquiry into the Robert Pickton killings continues to mount.

VANCOUVER -- Four non-profit groups granted status at the public inquiry into the Robert Pickton case say they won't be participating because they haven't been given government funding -- and several other organizations are considering following suit.

The Union of B.C. Indian Chiefs and the Carrier Sekani Tribal Council announced Wednesday they will not be participating at hearings set to begin in October, which will examine why police failed to catch Pickton as he murdered sex workers from Vancouver's Downtown Eastside.

The Native Courtworker and Counselling Association of B.C. has already said it won't be involved, and WISH, a drop-in centre for sex workers in the impoverished neighbourhood, said it simply can't afford to take part in the hearings.

Former judge and one-time attorney general Wally Oppal granted all four groups participant status at the inquiry, and they were among more than a dozen organizations that Oppal recommended receive government funding.

But the provincial government has refused, saying it will only pay the legal bills for the families of Pickton's victims.

"The decision was quite simple: we don't have any resources to hire counsel to be a part of the inquiry the way we want to be involved,'' Terry Teegee, vice tribal chief of the Carrier Sekani Tribal Council, said in an interview.

Oppal made his funding recommendations in May, and repeated them earlier this month in a strongly worded letter to the provincial government. Oppal said expecting non-profit groups to pay their own way while agencies such as the RCMP and Vancouver police will all have government-funded lawyers was the "height of unfairness.''

Last week, the province's deputy attorney general, David Loukidelis, wrote Oppal and reiterated the government's position. Loukidelis said the province doesn't have the money to pay for lawyers for all of the groups that were granted standing.

Kate Gibson of WISH said her group won't be able to participate, though she doesn't know if they will formally withdraw.

"I'm not sure what pulling out would do, because we've been shut out; it's not as if there's an option here,'' Gibson said in an interview.

"We don't have the resources to do that. And they (the government) have definitely indicated that they have no interest in hearing from the organizations that have any interaction with the women. There's not an appetite for that at all.''

Oppal will not comment further on the matter, but a spokesman for the inquiry said there's nothing else Oppal can do.

"The commissioner would prefer that all groups that have been given standing were able to participate, and it's disappointing that funding wasn't provided,'' Chris Freimond said in an interview.

"He feels that he's done what he can as far as trying to convince the provincial government to provide funding. He does accept that that's the government's decision, and he does not see much point in continuing to pursue that.''

Attorney General Barry Penner was not available for comment, but in an email statement he repeated his previous comments that the decision was a financial one.

"These continue to be challenging economic times, and there are limits to how many millions of taxpayer dollars we can provide to lawyers representing advocacy groups,'' said Penner's statement.

Other groups that have been granted participant status, but not funding, have raised doubts about whether they'll participate.

David Eby, executive director of the B.C. Civil Liberties Association, said his group has not yet made a decision but rather will wait and see what other groups decide.

"We're not going to participate if groups representing sex-trade workers and other marginalized populations like aboriginal people aren't able to participate in their own inquiry,'' said Eby.

The B.C. Civil Liberties Association has participated in previous public inquiries, including one into the death of Frank Paul, who died in police custody in Vancouver. Eby said his group and others were funded by the government during those hearings.

This inquiry will examine why the Vancouver police and the RCMP failed to catch Pickton as he spent years murdering sex workers from Vancouver's Downtown Eastside until his arrest in 2002.

Pickton was eventually convicted of six counts of second-degree murder, although the DNA from 33 women were found on his farm in Port Coquitlam, B.C. He told police that he had killed 49 women.

Oppal will also conduct a less-formal study commission into broader issues of missing and murdered women in the province, including in the north along a stretch of road known as the Highway of Tears.

When Oppal was appointed, he was asked to report issue his report by the end of this year, but Freimond said the commissioner will be asking for an extension.