Vancouver, also known as "Hollywood North", is home to dozens of visual effects, animation and gaming studios, as well as world class education facilities. It recently became home to a branch of the renowned animation house -- Pixar. Now,  the 38th international SIGGRAPH (Special Interest Group on GRAPHics and Interactive Techniques) conference is taking place here, too. 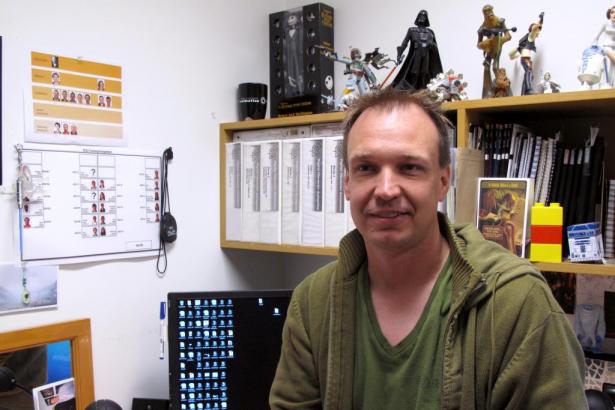 The office door closes as outside, and the rumbling hubbub of
Vancouver Film School students quiets down to a murmur.  As the door
locks with a 'click', Greg Berridge, Senior Instructor of Animation and Digital Character Animation, lets out a sigh of relief. A few minutes
of respite from a frenzy of students. He jokes that the
clamor of students will be nothing compared to the noise generated by
the vast number of attendees at August's upcoming SIGGRAPH conference.

"We're expecting record numbers.  This is the first time SIGGRAPH has
been outside the US border, so there's a lot of people in the 3D
industry that are considering taking an extended vacation just to come
to Vancouver for the conference." he said.  "We have estimated roughly 25,000 attendees this year.  There's going to be a lot
of geeks in town!"

A proud Star Wars geek, Berridge has been going to SIGGRAPH
since 2001, where he noted that it was a place where many young
digital artists get a chance to see and meet their heroes.  When
Berridge attended SIGGRAPH back in 2005 in Los Angeles, he attended an
after-party hosted by Industrial Light and Magic
where he was able to meet the legendary George Lucas.  Berridge grins
from ear to ear as he explains that he had a copy of the Star Wars
novel with him, and managed to get it signed by Lucas himself.

This year, Berridge has been chosen by prominent 3D software company -
Autodesk to showcase outstanding student
work from the various animation programs available at Vancouver Film
School.  His presentation will primarily feature the best recent
student work and also what VFS alumni have gone on to achieve in the
motion picture, television and game industries.  He also mentioned
that there are a few surprises in his presentation as well which are
'top secret', but he freely shares the fact that the latest version of
the Maya software package  -- Maya 2012 --
will definitely be featured at the Autodesk booth.

Having taught animation with the Maya software package at VFS for over
a decade, Berridge is an ACE - Autodesk Certified Evaluator.  One
level higher than an ACI - Autodesk Certified Instructor.  It is not
an exaggeration to say that an ACE is an extremely rare and highly
respected position amongst the many 3D instructors, as Berridge is the
only ACE in western Canada.

When asked why he chose the Maya software package over other 3D
packages available at the time, he answers, "It's my first love.
Maya is a package made for artists, not a technical program made for
technicians.  It's development was very rapid and provided regular
updates either every six months or every year, whereas other software
packages stalled in their development cycles and failed to provide
updates desperately needed by students and industry professionals
alike."

As for the future of 3D development, Berridge muses that it all lies
with the utilization of digital pen (and tablet) technology.  With
graphic tablets like Wacom's Intuos and Bamboo becoming more common,
as well as the touch screen technology of iPads, it is safe to say
that the use of such tools for animation would become commonplace for
commercial 3D software packages. "What the Disney animators did when
they were using digital pens on Tangled was phenomenal." Berridge
explains, "Using a pen to animate is a more elegant solution than
using a mouse.  Technology is always changing."

"I am proud that SIGGRAPH is coming to Vancouver, and the fact that
Vancouver is starting to be known as a real super power for creating
content for motion pictures and television," he said.  "It bodes well for all the local students, artists and all the high level international companies
opening studios on Vancouver."

SIGGRAPH 2011 runs from August 7th to 11th at the Vancouver Convention Center.  More information available on the website.  The Vancouver Observer will be publishing a series of articles to highlight software companies, educational facilities and production houses that will be presenting innovative technologies in the 3D graphic and animation field.