The 2011 royal tour of Canada is the first international trip by newlyweds Prince William, Duke of Cambridge, and Catherine, Duchess of Cambridge. Their first official tour as a couple, and Catherine's first tour as a Royal, has been considered historic. But the Reseau de Resistance du Quebecois, the controversial Quebec pro-independence grouparen't planning an adoring welcome for the Prince and Kate.  They see royalty as a colonial relic, and resent that the sovereign still serves as Canada's head of state. 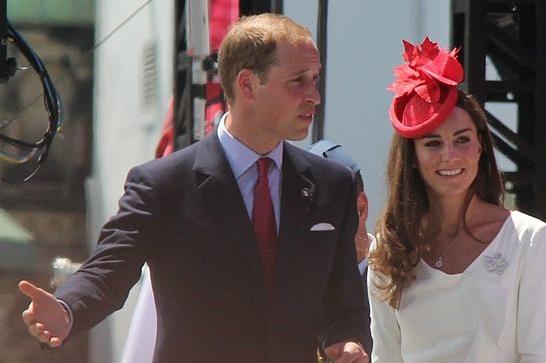 How rowdy will protests get as Prince William and Kate come to Quebec City into territory where British royalty can be more reviled than revered?

They see royalty as a colonial relic, and resent that the sovereign still serves as Canada's head of state.

Here's a report from The Canadian Press:

Prince William and Kate have arrived in Quebec City on what promises to be an action-packed Day 4 of their Canadian tour.

The royal couple are in the provincial capital after an overnight trip from Montreal along the St. Lawrence River.

Several people gathered at the Champlain Harbour Station to catch a glimpse of the Duke and Duchess of Cambridge, but they were out of luck.

Their trip to Quebec City coincides with the 403rd anniversary of the city being founded.

First up for the newlyweds today is a prayer service aboard HMCS Montreal.

``The Anglican Church of course shares a long history with the monarchy,'' Drainville said in an interview before the ceremony.

``So the prince's presence is important for all Anglicans.''

After the service, William and Kate head to La Maison Dauphine, a centre that helps homeless youths.

The couple then take part in a freedom-of-the-city ceremony at city hall _ an event where anti-monarchist Quebec sovereigntists are expected once again to voice their displeasure at the royal visit.

The rapturous and unanimous love-in that welcomed William and Kate in Ottawa dissipated in Montreal on Saturday when protesters chanted anti-monarchist slogans.

However, they have already said burly supporters will act as muscle over the weekend _ to keep the protests from getting out of hand.

History shows the group has a tendency to get rowdy when it comes to the Royal Family.

In 2009, the organization led an anti-monarchy demonstration during a visit to Montreal by Prince Charles and Camilla.

The protest delayed their arrival at a military ceremony by about a half-hour, and Charles and Camilla had to enter through a back door because of the raucous demonstrators.

The group also helped block the planned re-enactment of the Battle of the Plains of Abraham a few years ago and has protested the performance of Anglo songs at Quebec's Fete nationale holiday.

Polls do suggest the monarchy is, by far, less popular in Quebec than elsewhere in the country.

Many here see the institution not only as a colonial relic, but also as a reminder of ancestors who had their land conquered by the British army; they resent that the sovereign still serves as Canada's head of state.

From there, attention turns to events that recognize Britain-Quebec history.

First is the freedom-of-the-city ceremony, which is a tradition introduced by the British in 1748 to confer upon armies the privilege of entering a fortified city bearing weapons. The ceremony today will acknowledge the relationship between Quebec City and the Royal 22e Regiment.

The ceremony will take place at city hall, and that is where the biggest protest is expected.

William and Kate are later scheduled to visit the Citadelle, a fortified residence at the foot of the Plains of Abraham, which was the scene of the 1759 pivotal battle in the Seven Years War in which French troops were defeated by the British.

Then the royal pair are set to visit Forts-de-Levis, a fort that was built between 1865 and 1872 under the supervision of British military engineers.

The fort completed a defence network protecting Quebec from future land invasion by Americans. It is also the highest point in the region.

Once they wrap their swing through Quebec, the royal pair will head to Charlottetown this evening, where they will attend an informal media reception before retiring for the night.

Yellowknife and Calgary are their other Canadian stops before they leave for California on Friday.