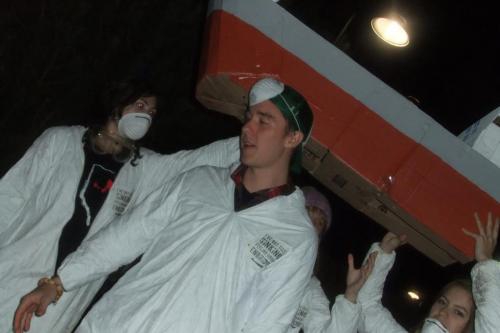 Protesters from Greenpeace outside a cocktail reception hosted by Enbridge at the Pan Pacific in Whistler.

In the shadow of Whistler Mountain, a small group of activists gathered to protest against the Enbridge Northern Gateway Pipeline project Tuesday night. Members from the Council of Canadians, Greenpeace and Whistler Watch demonstrated in front of the Pan Pacific Whistler Mountainside where the pipeline developers were hosting a cocktail reception during the Union of BC Municipalities Annual General Meeting (UBCM).

Holding a large sign that read, "No tankers, no pipeline, no problem," the Greenpeace protesters, who were clad in white jump-suits and face masks, stood in front of the window of the hotel's Dubh Linn Gate Old Irish Pub. “We don’t need your Enbridge pipeline/We don’t need no dirty oil!” they sang. UBCM delegates clustered in front of the windows; some of them smiled and waved.

"The provincial government's position is that we want to make sure that anything, that’s done, is done as safely as possible," said Provincial Environment Minister Barry Penner, who was in Whistler to attend the UBCM conference. "Everybody is looking again at what the appropriate standards need to be."

The federal government has jurisdiction over shipping off the coast of British Columbia. In 1972, the Pierre Trudeau government instituted a moratorium on north coast tanker traffic. Recently, politicians and environmental groups have sparred over the current status of that decision.

"I'd have to defer to what the federal government has indicated in terms of clarifying the moratorium. There is a federal policy in terms of tanker traffic up and down the coat and how far they need to stay away when those ships are coming from Alaska to refineries in Northwestern Washington State. For example they don’t ply the waters between Vancouver Island and the Mainland," Penner said.

But the project just doesn't make any sense to Pina Belperio, founder of Whistler Watch, a local watchdog group.

The proposed 5.5 billion dollar Gateway Pipeline would funnel 520, 000 barrels of oil from Edmonton to Kitimat, B.C., where they would be loaded onto supertankers bound for Asia. Oil sands production is expected to almost double to nearly three million barrels per day by 2020. The majority of this will be shipped to the U.S.

"It is a BC wide issue. It is probably one of the biggest issues that will face us in the coming years," said Belperio.

“Enbridge has an atrocious record in the US. We would be piping crude oil, which is destructive to begin with. It just doesn’t make sense. Economically, environmentally. I don’t want tankers in our waters or crude,” Belperio, who represents BC and the Yukon at the national level of the Council of Canadians, said.

Earlier this month, the Canadian pipeline company was forced to close a major crude transportation link after a leak was discovered in Romeoville, Illinois.

"For many years we’ve fought for a legislated ban on tankers," Gary Coons, NDP M.L.A. for the North Coast, said. "There has been one for forty years through seven prime ministers, there’s been a policy on no tankers on the North Coast and we continue to fight for that."

"First Nations came together in the legislature on the anniversary of the Exxon Valdez. Gordon Campbell stood up and basically said that they support Enbridge and they support the Joint Review Panel and the process to go forward," said Coons.