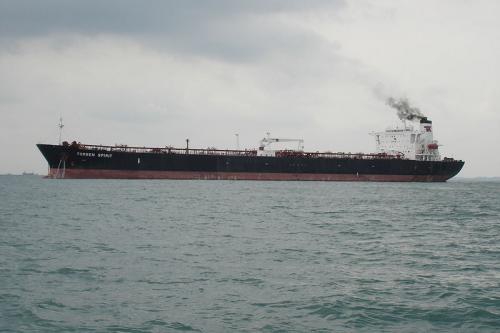 An aframax oil tanker, the model used in Burrard.

Looking towards the North Shore on a clear day in Vancouver, the sun catches rolling blue waves framed by a ring of towering mountains. Gulls ride invisible currents of air, children dart in and out of the water, and in the distance an oil tanker glides towards open seas. Now imagine if an accident were to occur, seeping sludgy oil into the Burrard Inlet. Soon it would wash up on the beaches, coating the shores and marine wildlife in a thick black blanket.

Last year, approximately 3.9 million metric tonnes of Alberta crude oil passed through Burrard Inlet in 65 Aframax oil tankers, up from 45 the previous year.  These growing numbers of tankers raised an alarm for Peter Baker, a North Vancouver resident and oceanographer.

“Environment Canada predicts a catastrophic oil spill every 15 years," Peter Baker, who has a keen interest in oceanography, told Vancouver City Council yesterday.  He didn't specify if he meant Vancouver or the world. But he went on to say that a spill in the Burrard Inlet or Second Narrows would spell environmental and economic disaster here.

In the event of an oil spill, a company called Burrard Clean Operations would be responsible for the clean up.  Burrard Clean Operations website indicates that they function as a kind of insurance company for the corporations who might be involved in such a disaster.  Oil companies, tankers/bargers, freighters/non-bulk carriers, ferries, cruise ships and oil handling facilities make up their customer base of 1,700 members.  Full members hip for only $600 is offered to clients that under the Canada Shipping Act, are required to have an agreement with a Certified Reponse Orgnization.

Wright agreed.  “If every litre, every tonne, ended up in the water, absolutely."

In the first six hours of a spill, which are considered the most critical, Wright said the company could handle 10, 000 tonnes of oil and that then reinforcements would arrive. Aframax tankers, used to transport oil in Burrard Inlet, carry 120, 000 tonnes, Captain Stephen Brown, President of the B.C. Chamber of Shipping, said.

Councillor David Cadman sounded skeptical of Burrard Clean Operations' capacity to save the coast and marine life, in the case of a spill. “Basically what we were told is [that] if there is an accident within that 20 minute window, then we’ll call Burrard Clean-up, but they don’t have the capacity. If they don’t get there literally the moment the accident occurs the oil will be dispersed all around the port and onto the beaches in no time.”

Brown assured council that many measures were being taken to ensure safety on oil tankers.

“Our training [of ship personnel] is intense, our quality vetting for the ships especially in our tanker industry, is intense,” said Captain Brown.

If an oil spill were to happen, however, “Vancouverites [and] First Nations would be left holding the bag,” Josh Paterson of West Coast Environmental Law said.

“What’s considered a good clean-up in the industry is 15% and that’s seldom achieved," Paterson said. "When oil spills into the ocean, it’s impossible to fully clean it up."

Kevin Wallinger, Director of Emergency Management for the City of Vancouver, outlined the current response plan in the event of a spill.

“There is a provincial plan through the ministry of environment which speaks to the local authorities. We would have an incident command post, that incident command post would be managed by a group of agencies [including] Burrard Clean and the spiller,” said Wallinger.

When asked by The Observer whether Vancouver is better prepared for an oil spill than BP and the American government, Mr. Wallinger, Director of Emergency Management said the situations were too different to draw a comparison.   “But from a public safety perspective, we’re doing all we can from the city to try and consider all the different types of hazards. I think we’re certainly prepared.  The long-term social and potential health issues will play into any decisions that are made, but the initial priorities are for public safety.  A lot of it comes down to how everyone communicates with one another,” said Wallinger.

Christianne Wilhelmson, the Executive Director of the Georgia Strait Alliance, insisted that “we need to stop the increase in tanker traffic.” She called for an inquiry into the risks and consequences of shipping oil in the inlet and the inclusion of various stakeholders.

Since 2004, Canada has been the top supplier of oil to the United States. The oil shipped through the Westridge terminal in Burrard Inlet arrives via a pipeline, owned by Kinder Morgan, from Haines, Alberta. It is typically destined for California.

Baker, who was pleased with the outcome of the meeting, wants the public discussion to continue.

“My hope is that the regional pressure will build and get transferred. City council has more contacts than I do in the Provincial government.”

In the lead-up to Tuesday’s meeting, some had questioned why discussion about oil shipping had not been put forward to other port cities in the Lower Mainland, including North Vancouver and Port Moody.

“We need to find out what the risks are, what needs to be mitigated and who’s responsible," Mussatto said.

“The big issue is second narrows because it’s a very tricky narrows and there have been challenges in the past, many years ago. The other big issue is we need to involve First Nations.”

The meeting will take place “later in July or August.”