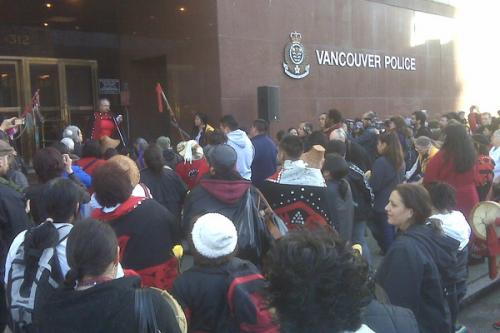 It was Valentine’s Day and hundreds spent it in the Women’s Memorial March downtown to honour the memory of the women from the Downtown Eastside who die each year due to violent physical, mental, emotional and spiritual abuse. The march began 19 years ago after the brutal murder of a Coast Salish woman.

Prior to the march, a press conference was held where the following women spoke: Stella August, Gladys Radek, Carol Martin, Maggie deVries, Corinthia Kelly and Mona Woodward. This report is an interweaving of the information shared by these six women who called for a public inquiry into the fate of Vancouver's missing women and called on the public to take more of a role in demanding better protection for women in BC.  Here's a wrap up of some of what was said:

-We thank the Coast Salish people for having this event here on their unceded territorial land. We are the voices that speak for our murdered sisters, who have no voice, to find justice.

-Women after women were taken from these few square blocks, where we stand, while an ongoing police investigation into Robert Pickton occurred. Since 1997, 15 more women were murdered after the police knew about him.

-How is this possible? Robert Pickton’s trial and conviction is only one small part of what needs to be done. Thousands of people do not know the fate of their loved ones. There is no publication of their names in the papers. There is no police search for these women, just their families coming here to the DTES looking for them. This goes on daily as part of our whole country’s scenery and we need to change this.

-In order to bring change, British Columbia must hold a public inquiry which both Vancouver City Council and the Vancouver Police Department fully support. We have asked all levels of government and have yet to receive a reply from Michael de Jong. The Attorney General of BC has refused our demand for a public inquiry even though the VPD has agreed there is a need for one. The province’s lack of response feels as if they don’t care. These investigations have not been called because the women are missing from a poor area. They are marginalized women, aboriginal women, sex workers, and drug-users. They are a group of women we as a society do not see as human.

-The Vancouver Olympic Committee asked for this march to be stopped and we said no. Apparently, to them, this march didn’t generate any money and it’s all about money for them.

-We know there’s a problem here. With only one conviction, women continue to be murdered on a daily basis in the DTES. There is no accountability and no funding to solve this. It can only be brought about by bringing attention to it. Part of that is bringing attention to the homelessness and poverty which are closely connected to violence against women.

-First and foremost, the government must take action to address our issues. The government has denied our indigenous rights three times. They have apologized yet made no changes to policies. It’s like dealing with an abusive person who beats you up, apologizes and makes no changes.

-We the people must take a leadership role. Nothing is coming from the court houses nor from family court. Residential schools have not gone away; they are just replaced by the welfare system. We must go beyond the Canadian government who is not honouring our rights as indigenous peoples, as indigenous women, and as people.

-It takes each and every one of you who has come here today to know something has gone wrong and to do something about it. These women are human beings. Please help us move forward to create safety for the most vulnerable among us. The spotlight of the international media puts a great pressure on the government to take steps to end this.

-We have a really strong group of empowered women who will fight until the end for our basic human rights. We are fighting for closure, justice and accountability for the life-givers of our society. These women are valued. For every woman who falls, the people and the community are affected by it. It leaves a void in the heart of the community.

When asked whether or not the message of the march has evolved over the years, the reply was, “Unless they bring back our programs and raise the rates for the poor, we are still going to be vulnerable.”

The answer to the question of where is the safest place in the city was, “There is no safe place for women in Canada. We are all vulnerable.”

Later, it looked like thousands of people gathered to witness as the friends and families of these women streamed out of the Carnegie Centre. As a group of women drummed and sang, we witnessed family after family going by us, onlookers, for over 10 minutes. It was heart-wrenching to see this steady stream of humanity walking by us bearing witness to lives no longer with us and it was wonderful to see both men and women in the audience openly crying. Every stripe and colour of human being, from uptown fashionistas to the DTES downtrodden, were there witnessing and later taking part in the march. It did feel like, in fact, the whole world was there. Three eagles flew high above as a wonderful confirmation and blessing and the VPD were there, on bicycles, fully supporting the event.

The march wound through the DTES, stopping at sites where women had died, to lay a yellow or red rose in remembrance and to perform spiritual ceremonies for healing. The press was asked to respectfully not record any of the ceremonies during the march.

Author’s Note: Since the Olympics have begun while walking home, I have been accosted two times by men in vehicles yelling out at me, “How much?”