Nathan Cullen on Harper, Trudeau and finding his voice 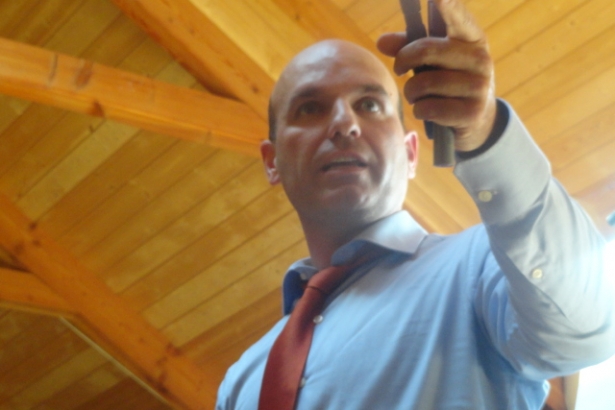 “I see it emote a response from the Prime Minister, which is rare. When we hit certain notes in Tom Mulcair's questions around Nigel Wright, I see it."

Liberal leader Justin Trudeau, meanwhile, is “very self-aware” about his celebrity, and understands both the good and the bad aspects of being famous.

“I can make fun of Justin when I'm with him. I do a lot of this when I see him,” he said, whipping imaginary flowing locks with one hand.

“I appreciate that because I wouldn't know what it's like to be born famous and to try and come out normal out the other end. So I think he's done a good job of being normal, despite all of those pressures of being there.”

Cullen spoke about the things he found to admire in Harper and Trudeau after a talk that focused on the unexpected twists and turns that shaped his own political career: how, as a reluctant 31-year-old rookie NDP candidate, he pulled off a game-changing win in a traditional Conservative riding, and how he brought together unlikely allies on controversial issues such as farmed salmon and methane gas drilling.

Cullen's foray into politics was sparked by a Chamber of Commerce breakfast in Smithers, where he ran a consulting business.

“At 7 a.m. in the morning, I'm just getting my first cup of coffee -- I don't know who they're talking about. Until I finally connected the dots. In both of those ridings, 35 per cent or so of their riding are First Nations.”

Cullen was outraged by the way the two spoke about Aboriginal people in Skeena—Bulkley Valley, saying that “it was one of the most racist speeches I'd ever heard.”

Furious, he approached a friend, Bill, who had run for office as an NDP candidate, and told him they needed to “beat those guys”. His friend looked at him thoughtfully and told him that a federal election was coming up, and that the party had yet to find a candidate. Would Cullen consider making a run for the seat?

“I told him I can't do it,” Cullen said, a horrified look on his face. “I run a private business, half my clients are corporate. If I fly a partisan flag, I'll lose half my business. No. I won't do it.”

After the initial meeting, Cullen did a bit of research and found that that the NDP wasn't just losing in the last few elections, but that they were getting “crushed” -- the race wasn't even close.

When his friend tried repeatedly to recruit him as an NDP candidate, Cullen grew exasperated:

“I said, 'Seriously, you've gotta find someone else. Nobody knows who the hell I am. They want someone home grown, I'm from Toronto,” he said in a whispering voice. “While not completely, I was balding pretty fast. In politics, not a winning formula, right? So I said no.”

“And Bill did the smartest thing he could have done. He said, 'You're totally right...we'd get killed with you... There would be no money, and it would be disastrous for you and for everybody else.'

Relieved, Cullen left the meeting and took a walk around the mountain outside Smithers with his then-girlfriend, now his wife.

He revealed his dilemma to her, comparing it to Kobayashi Maru, a Star Trek analogy of an unwinnable test that was rigged to defeat a player no matter what.

After talking to her, he came to the conclusion that 'If you can't win, reset the terms so that you can.'

“The story then was that we're Conservative,” he said, noting that all of the elected officials then were right-wing. “We were going to reset the story: eventually, it was going to be a progressive place. A place where people talk about social justice and the environment and about First Nations equally.”

“So we ran, and ran. I shut my business down, until I only had $5.35 on my account...We ran very hard, but we still had very little chance because we were running against an incumbent who had won by 20-something points (in the last election).”

Worst of all, on the night before the election, he had viewed the Elections Predictions Project blog, which had a 92 per cent accuracy rating at time. And it predicted that Cullen would be defeated by the Conservative candidate.

Up to $500 billion in damages from Keystone XL oil