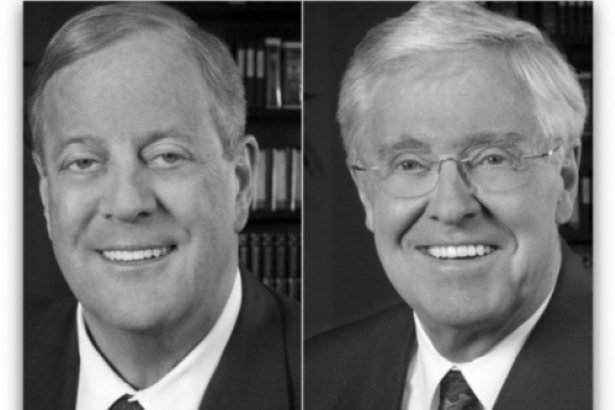 A Charles Koch Foundation has founded the Vancouver-based Fraser Institute's "Economic Freedom of the World" reports since 2008. The reports are referenced several times in the "Economic Freedom" ad above, which suggests that more economic freedom leads to higher quality of life.

The Charles G. Koch Foundation has donated $150,000 to the Vancouver-based right-wing think tank Fraser Institute in 2011, according to U.S. tax records. The funding was for a report, which now seems to be a key part of a larger Koch campaign promoting "economic freedom".

This is the fourth year of funding for The Fraser Institute by the Koch Foundation. Fraser received:

The donations that the Vancouver Observer has been able to confirm through U.S. tax records total $625,500 since 2007.

The Koch brothers are hard-right libertarians who co-founded the Tea Party to promote an agenda of reducing government and lowering taxes. They have donated over $100 million to conservative causes and climate change denial, and have invested in Canada's oil sands for over 50 years.

Fraser Institute communications director Dean Pelkey said that the Koch funding goes toward the Institute's annual Economic Freedom of the World report, which links "economic freedom" to quality of life and attempts to measure it in more than 140 countries. The study was started 25 years ago by a research team led by Nobel Laureate Milton Friedman and former Fraser Institute executive director Michael Walker. The Charles G. Koch Foundation is not mentioned anywhere in the acknowledgements of earlier reports, but starts appearing in every annual report since 2009.

Last year, Walker told the Vancouver Observer that the Fraser Institute had also been receiving funding from Koch Industries in earlier years, as they had "extensive holdings in Canada".

The report is a big deal to U.S. right-wing institutions. The Searle Fredom Trust contributed $100,000 to the Fraser Institute in 2010 and 2011 specifically toward the report, according to IRS tax records. Americans for Prosperity, a libertarian policy institute which recently spent $33.5 million against U.S. President Obama during the 2012 election, also splashed the Fraser Institute's latest report prominently on its site last month.