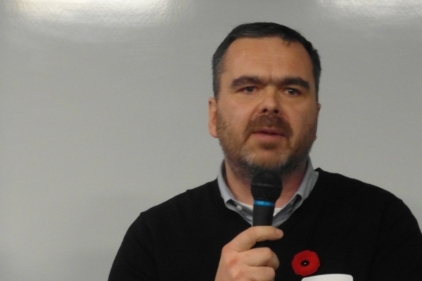 A Kinder Morgan Canada executive did not rule out the possibility of a million barrels per day of oil and petroleum products going through a proposed expanded pipeline in BC.

"Is a million barrels possible, in the configuration you're engineering now?" retired CBC journalist Robb Lucy asked Michael Davies, director of engineering for Kinder Morgan Canada about the capacity of the twin pipeline in a debate on Tuesday.

"The project that we're on approval for is for 750,000 barrels," Davies replied.

"Is a million possible?" Lucy pressed.

"Well, anything is possible, I suppose--that's why I have to be careful with my answer," Davies said, to a sharp intake of breath in the room amongst some audience members.

"Is it a matter of pumping harder and faster?" Lucy asked.

"No, any change to the system that is approved, if it does get built, needs to get approval from the [National Energy Board]," Davies said.

The exchange was part of a tense debate about Kinder Morgan's proposal to twin its Trans Mountain pipeline which runs from Alberta's oil sands through Metro Vancouver to the Westridge terminal in Burnaby. The event, sponsored by Board of Change, drew almost 100 people to a classroom in UBC Robson Square-- students, academics, Vancouver residents and local media.

The reason why many are concerned about the possibility of an increase above 750,000 barrels a day figure is because the oil sands production in Alberta is set to double to 3 million barrels a day by 2020. Where would that oil come through besides TransMountain if the plan is to export to Asia and other non-U.S. markets?

Seated in a row on a small stage, environmental advocates confronted Davies with facts and arguments.

"Who's making the money?" Tzeporah Berman, environmentalist and writer asked the audience in her opening statement.

"The pipeline will benefit big oil, it will benefit companies like Kinder Morgan. We're being asked to bear incredible risks and told it's in Canada's interests," she said.

"What's at stake?" asked documentary filmmaker and Common Sense Canadian blogger Damien Gillis. "A $14-billion tourism economy which is rooted in our wild salmon, our Orca, our clean air and water that we market to the world under the brand as the 'Greenest City' in 'The Greatest Place on Earth."

Davies did not respond directly to either Berman nor Gillis' statements about profits and economic impacts during the debate.