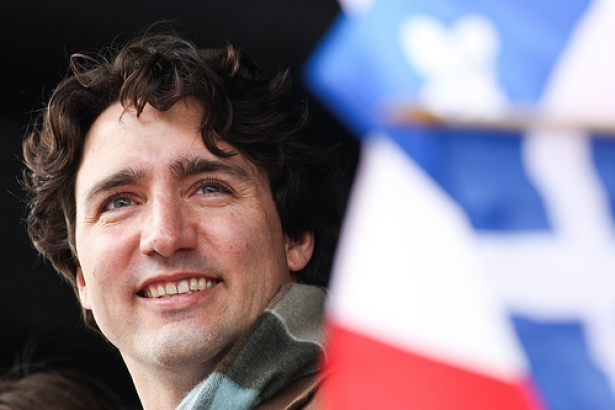 As many expected, Justin Trudeau has won the Liberal leadership race with a whopping 77.8 per cent of the vote. Joyce Murray, an outspoken candidate who urged electoral co-operation between Liberal and NDP supporters, came in a distant second.

Outgoing Liberal Leader Bob Rae made the following statement today on the election of Justin Trudeau as the new Leader of the Liberal Party of Canada, and congratulated the Liberal Party on running the "most open and inclusive leadership process in Canadian political history," with nearly 105,000 members and supporters voting.

Reactions on social media to Trudeau's victory were mixed, ranging from elation to skepticism over his yet unclear platform.

"Justin Trudeau is the new federal Liberal Leader in Canada. Our Obama years will be here shortly. #WolfInSheepsClothing" tweeted Christopher Munro, while others praised his victory, saying he could be Canada's future Prime Minister.

"Justin Trudeau is “a blank screen on which people of vastly different political stripes project their own views.” + genetic pedigree," Wodek Semberg commented.

Trudeau has attracted some vocal criticism -- as well as praise -- for his support of the controversial Keystone XL pipeline, which would transport bitumen from Alberta's oil sands to refineries in the Gulf Coast. He is, however, opposed to the Enbridge Northern Gateway pipeline that would bring bitumen across Northern BC to reach Asia markets.

He also said in the past that he supports foreign ownership in Canadian resources, including Chinese state-owned enterprises like CNOOC in Alberta's oil sands.