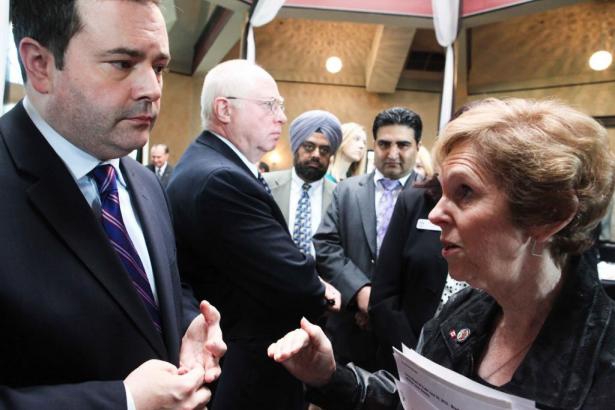 Citizenship Minister Jason Kenney told Jackie Scott, the daughter of a Canadian war veteran, that her father – and others serving the country – technically weren't Canadian at the time they were fighting for their country.

"(Soldiers) are heroes, but at the time, they're British subjects," Kenney said firmly, before explaining that there was no such thing as a Canadian citizen prior to 1947. He told Scott that her Ontario-born father was "clearly not, obviously not" a citizen during World War II.

"There was no citizenship before 1947," he reiterated, before breaking off the conversation.

Scott is one of the  "Lost Canadians" – a group of legitimate Canadians who have a Canadian parent and have spent most of their lives in Canada, only to be denied or excluded from citizenship due to legal loopholes. Scott was told by Citizenship and Immigration Canada this year that she did not qualify for Canadian citizenship because her Canadian war veteran father was a "British subject" at the time of her birth, and not a Canadian citizen. In her previous applications, she was rejected due to the fact that she was born out of wedlock in the UK, even though her parents married shortly after her birth and "legitimized" her upon coming to Canada.

"You've forced me to go to court over this issue," Scott told Kenney, referring to the lawsuit filed earlier this year against the Canadian government.

"I'm sorry," Kenney responded, explaining that her situation was caused by old laws of the time and not by any deliberate intent on the government's part.

Scott, along with others, have been urging government to correct those 'old laws' for years. Even though Kenney appeared not to have recognized her, Scott believes her name (and back story) may be familiar to him from articles written about her in media.

"I introduced myself as Jacqueline, and he called me Jackie," she observed after the exchange.

She believes that despite Kenney's claims to the contrary, Canadian citizenship did exist prior to 1947, and has many documents -- including materials handed to her father prior to battle and entries in the Encyclopedia of Canada (1940 ed.) -- clearly defining Canadian citizenship.

Scott was emotional as she confronted the Minister at his table at a speaking event about immigration in Surrey last week. She had spent most of the past decade agonizing over her citizenship, and here was the head of the ministry that kept rejecting her appeals, sitting at the table beside hers.

The Minister came to speak to audiences about fast-tracking immigration for young people who had studied and worked in Canada for two years or more. Scott, meanwhile, had lived in Canada for over 50 years and has Canadian children. She is the only one in her family who remains a non-citizen of the country, making each Canada Day a bittersweet occasion.

"I thought that if Jason Kenney could put a face to the issue (of Lost Canadians), it would make it easier for him to understand," Scott said, explaining her reason for coming to the event.

Kenney said that he would try to "close the loophole" for Lost Canadians like Scott in the fall, but did not elaborate on whether that would mean acceptance or continued exclusion.

Why is it that new Canadians who immigrate and work for a few years in the country are more eligible to citizenship than the Lost Canadians? The Citizenship and Immigration office in Ottawa responded that people like Scott were welcome to make their case if they have experienced "undue hardship" or made an "exceptional contribution" to Canada. So far, despite her father's service to the country and her many years living in Canada, Scott's applications for citizenship have been denied four times.

It did not explain why the government chose 1947 as the cutoff date for giving citizenship, nor why individuals like Scott remained excluded to this day. According to Lost Canadians advocate Don Chapman, the government's solution was incomplete due to the fact that it inexplicably shut out around 5 per cent of Lost Canadian cases and created a whole new class of stateless children born abroad.

"My only question is: are they going to resolve this issue before I'm dead?" Scott asked anxiously. Some elderly Lost Canadians, including World War II veteran Guy Vallière, have already passed away without fulfilling their dream for citizenship.

Scott wonders today if she will be able to escape the same fate, and whether she will one day be able to celebrate Canada Day as a citizen, along with the rest of her Canadian family.