“...not only must we monitor international terrorist plots directed toward the Olympics, but as well, those originating within Canada.” By late 2008, terrorist and domestic extremist ‘Groups of Interest’ are the priority for security agencies.”

A secret intelligence assessment in November, 2008:

“Multi-issue extremists and aboriginal extremists may pursue common causes, and both groups have demonstrated the intent and capability to carry out attacks against critical infrastructure in Canada.”

And just who are the 'multi-issue extremists'?

"This category is then used to lump all kinds of activities, dissenting voices, from anti-capitalists, to First Nation protestors, to Olympic protesters under this umbrella term," Walby said.

“We did find it a bit disturbing to see all kinds of peaceful protests, like the Raging Grannies, being referred to as multi-issue extremists for participating in anti-Olympic demonstrations."

As groups like Al Qaeda and Black Bloc fell off the radar, the category is "now being used to label Idle No More protesters, anti-pipeline protesters, and anti-fracking protesters in Quebec,” he said. Activities such as media stunts and the unfurling of banners were construed as “threats,” or a “non-violent attack” by the police. 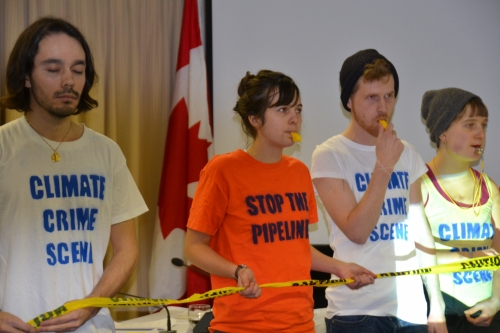 “I would like to direct you to our latest Public Report which can be found on our website. It addresses the issue of multi-issue extremism.”