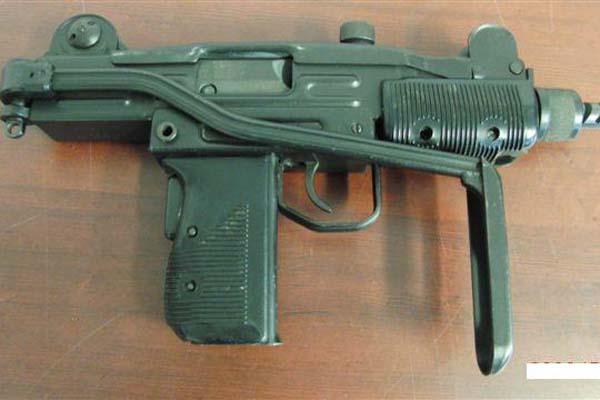 This automatic weapon was seized by the region's police anti-gang unit last May. The number of weapons seized tripled in 2011. Photo provided.

A spate of shootings – four of them fatal – over the last eleven days has raised questions about the supply of guns into the Lower Mainland.

And while gun-related crime has actually dropped according to police statistics, police are aware that organized crime have stockpiles of everything from handguns to submachine guns, most of that related to the illegal drug trade.

“Specifically with handguns and automatic weapons, it's generally coming from the U.S. or offshore,” said Const. Ian MacDonald with the Abbotsford Police Department. “They aren't from within Canada.

“We have a large unprotected border – in Abbotsford, we border the U.S. On a weekly basis, I would suggest we get called with a breach on the border."

"In some areas there is merely a ditch that separates Canada from the U.S.”

MacDonald added that his department's efforts pulled Abbotsford off the list as Canada's most violent city – dropping the murder rate to zero last year. Edmonton now has that dubious honour.

But the director of Simon Fraser University's criminology department argues that it is rarely people sneaking across the border who are responsible for the region's arms supply. Dr. Robert Gordon said that the guns – which are important for both security and as a currency in the illegal drug trade – are more often than not transported from the U.S. right under border guards' noses.

And sometimes, he added, guns cross the border due to corruption among border guards.

“It relies on the corruption of Canada Border Service agents in particular," Gordon said.

However, Const. MacDonald said the CBSA does a good job of maintaining border security.

“The enforcement on both sides of border is very good, but you still have this huge unprotected border,” he said. “Imagine all the crossing points.”

In 2007, a border guard at B.C.'s Pacific Highway crossing was arrested and charged with drug and arms trafficking after a 13-month investigation by the RCMP and the Canada Border Services Agency (CBSA). Baljinder Kandola, 35 -- who worked as a border guard from 2001 until his arrest in 2007 -- appeared in court in November facing six charges including importing a restricted firearm.

But a CBSA spokesperson told the Vancouver Observer that most of the weapons seized at B.C. border crossings – 109 last year – belong to U.S. residents in transit to Alaska, and are rarely associated with organized crime. But the agency acknowledged preventing corruption amongst its employees is a critical task.

“With respect to the issue of corruption, this is something all organizations have to protect themselves from,” said CBSA spokesperson Faith St. John.

“Unfortunately no agency is immune to acts of corruption.

“We do know that most of our employees carry out their responsibilities with respect, integrity, honesty and accountability, while doing their utmost to protect our border. The agency has no tolerance for illegal or inappropriate actions.”

Citing the difficult work of specialists in finding “secret compartments” in vehicles, and sharing intelligence with other agencies such as the RCMP – particularly in cases involving organized crime -- St. John described the CBSA's role of policing the border without unnecessarily impeding traffic is “a balancing act.”

Gordon believes that many of the arms shipments to Vancouver are made in secret compartments of vehicles, not over unguarded land crossings. He said that large numbers of weapons are too heavy and too visible to simply walk across the border.

“There are a lot of unsecured areas, but most of them require a fair degree of footwork, literally,” he said. “The border people know that: they're less concerned about securing the border as access to the border.

“A few years ago, truckers were moving marijuana south and cocaine north inside hollowed out logs. You bore a hole inside the log, rake out the inside, and fill it with product and put crap all over the end of the log. They would drive them across the border through pre-arranged border checkpoints.”

Driven by the illegal drug trade – which Gordon hopes to see legalized in order to reduce the role of violence and organized crime – the weapons of choice are the Glock handguns favoured by police, as well as automatic and semi-automatic weapons such as uzis.

Revolvers, he said, have a tendency to jam and therefore are considered less reliable.

Const. MacDonald recalls one incident last spring in which a suspect accidentally turned over his own weapon to police after being detained. An officer had seen a man in a parking lot he believed was on violation of his parole conditions. When he detained him in the back of the squad car, he asked the officer: “Can you do me a favour, can you go into my car and get my wallet?”

“Guess what's in the centre console with the wallet?” MacDonald said. “A handgun.

“Probably a brain fart on the part of that individual.”

MacDonald said that most weapons seizures by police are not related to organized crime either – in fact, the majority are families requesting police safely remove gun collections after the death of their owner.