Immigrant and first-generation teens struggle to define what it means to be Canadian. They turn to buzzwords like multiculturalism, tolerance and acceptance. Some say it’s like a passport, or that it’s ancestral. Others just don’t know. In the wake of Macleans' 'Too Asian?' controversy, The Vancouver Observer asked 35 teenagers how they see themselves and each other. Part four in a series. 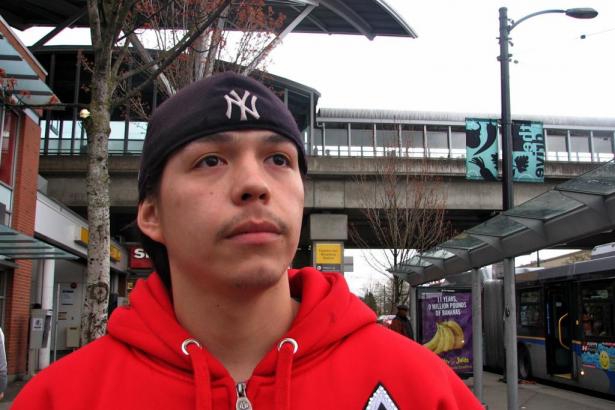 Joseph Posey in a photograph by Beth Hong

Seven native teenagers stand under a bus shelter bench at Commercial Drive and Broadway in East Vancouver. The teens toss jokes back and forth. Some smoke, others pace around. They gesture and talk. People move in and out of the group to buy something at the coffee shop or to talk to someone standing in a cluster nearby.

“We’re just chuggin’,” says a young native man in a baggy zip-up hoodie when approached. The group around him titters. The young man sways slightly, and steadies himself against the  shelter wall. He’s drunk.

In Vancouver, ‘chug’ is slang  for people of Aboriginal ancestry who are heavy drinkers and act rowdy in public places. Native youth in this city are increasingly using the term amongst each other, a trend some native teens say fractures a community already struggling with racism from outsiders.

Joseph Posey ran away from his foster home when he was 12 and lived on the streets for almost a decade, he says  He hung out with Aboriginal gang members on Commercial Drive and is one of the young Aboriginals who people on the street called a ‘chug.’ The word carries multiple meanings. It’s not just a racial term. It’s also a greeting.

“Chug is, I don’t know, from my point of view it’s not really racist. It’s one person saying it to another person, ‘’Sup, chug.’ But usually cause we’re on the street it’s more family,” Posey says.

“More time to use the term ‘chug’ is when you’re goin‘ against another person. It’s someone that’s- has- a grudge against you, ‘That chug right there,’ you know, he’s talkin’ shit about this person or that person,” he explains.

Posey, 22, got sober a year ago for his three children and girlfriend. Since then, he’s learned Japanese martial arts and plays lacrosse. He volunteers at Red Fox, a native youth outreach program that combines physical activity and leadership training.  Chug is a painful reminder of his previous life, he says. He  doesn’t want this term passed down to his kids. It’s a term that he heard from an early age in his foster home and on Commercial Drive from the teens he hung out with, and adults passing by.

“Kids learn off their parents. They learn off people that they see,” he said. “And the younger kids hear it all the time, and they think it’s okay,” he said. He thinks high schoolers are using the word even more than he did when he was in his teens.

About half of Canada’s Aboriginal population lives in cities, according to Statistics Canada’s 2006 census. A 2010 nationwide study by Environics Canada found that an overwhelming majority of urban Aboriginals felt they negatively stereotyped by non Aboriginal people. Three in four felt stereotyped as substance-addicted, unintelligent, lazy and poor.

“That’s why we grew up rebelling, drinking alcohol, fighting back,” he says.

The N-word, queer, and chug

“I would put chug in the same category as the N-word and queer’”, Reder says.