On anniversary of 2010 Winter Olympics, mixed feelings in Whistler 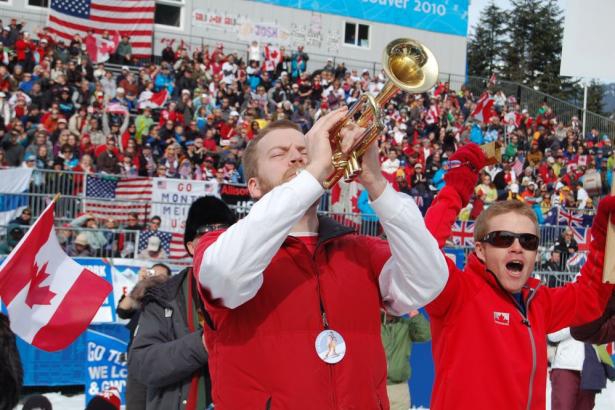 Last year, there was celebration in Whistler during the 2010 Olympic Games. Photograph by Linda Solomon

Whistler is celebrating its one-year Olympics anniversary with the Celebrate Live event from February 11- 13, including music performances by artists such as Jully Black and Hannah Georgas, anniversary cake, free face painting and street performances.   The mood in the village just two days before the event, however, is subdued. Many locals haven’t even heard of the party, and some who have are downright unimpressed.

One storeowner, who has been doing business in the Upper Village part of Whistler for 23 years, rolls her eyes and shakes her head. “What’s there to celebrate?” she asks. “Sure, the Olympics were great while they were here, but it’s over now. Get on with it.” A few doors down, another local grumbles that he can’t afford the $8-12 parking for the event.

Near the library, Proteck Industries co-owner June Ficko points to the building and says, “If they have the money to celebrate, that money should be used to keep this library open.” She explains that the public library is now closed every Sunday due to budget shortfalls after the Olympics.

While Ficko and others heaped praise upon last year’s Games, they expressed concern over the idea of yet another party to commemorate the event. With the surfacing of some negative aftereffects of the Olympics – the most prominent being the alleged culling of 100 sleddogs during the post-Games slump – many local residents are simply in no mood to party.

INVISIBLE VICTIMS
To some people, the downside of the Olympics was obvious from the start. Whistler writer-activist Pina Belperio, who has written many critical articles about the environmental and social consequences of the Games, says that the dog-culling incident was only part of the larger picture.

“It’s just the tip of the iceberg,” she says. “There are other issues, but if you don’t live here, you don’t see it. Nobody seems to care about the otters and beavers run over because of the new highway, or the logging in Whistler that happened just after the Olympics.”

Belperio makes a long list of direct and indirect victims of the Olympics: the destruction of rare wetlands for the new Whistler Transit Facility, the clearing of old-growth trees to build legacy trails and ski jumps and destruction of wildlife habitat. Some of the grievances, while not a matter of life-and-death, are a slow burn on the residents’ finances: the introduction of pay-parking (which used to be free) and fare hikes for the already-expensive public transit system.

“Community groups have had their funding cut dramatically this year,” she says. “Most non-profits haven’t gotten money, so now we all struggle.” She says that the sliding centre, one of the main tourist highlights, has become a “white elephant” that cost taxpayers $100 million to build.

“A lot of people aren’t connecting the dots, and they bring their kids to all the parties,” she says, “but ultimately, it’s the kids who lose out.”

Whistler resident and longtime Games critic Van Powel is also indignant at the money being spent on Olympic parties while public services continue to be underfunded.

“I’m embarrassed that a community that plans to spend $2.7 million a year to turn itself into a ‘cultural tourist destination’ has closed its library for almost 2 months a year because of a budget shortfall of $54,000,” he says.

Although the Resort Municipality of Whistler explains on its website that the Municipality is not responsible for the library’s budget, many people in the community link the $100,000 of celebration funding to the reduced hours.

While some locals express anger over reduced services, others have focused on long-term effects of the Games on Whistler’s natural environment.

“It’s only been one year, so we can’t say the full extent of the damage,” says

Claire Ruddy, president of AWARE (Association of Whistler Area Residents for the Environment), “But in terms lasting impact on the environment, we have the deforesting of the Callaghan for the Nordic Trails, the destruction of rare wetlands to make room for a bus depot, and the new highway running right through habitat of the red-legged frog.”