This story is Part Three in a series on the cancellation of Pamela Masik’s “The Forgotten” portrait collection from the UBC Museum of Anthropology, originally scheduled to run February 15 – March 21, 2011. Read Part One: When an outsider paints the DTES missing women and Part Two: With "The Forgotten," MOA sought to open conversation about murdered and missing women. 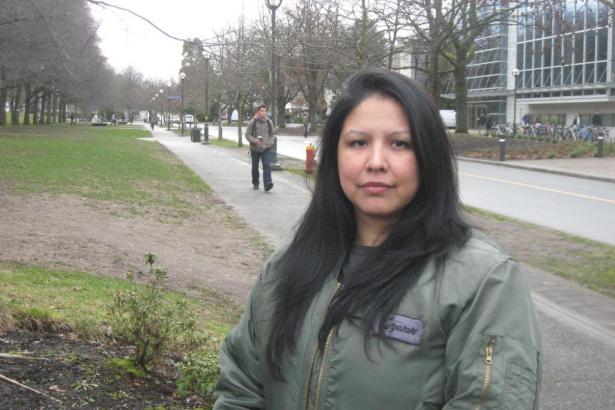 Gloria Larocque on the UBC campus.

“We were assured that there would be no way of pulling Masik. So we went on the grounds of ‘let’s work on creating something else.’”

Gloria Larocque and I are barreling through Vancouver rush-hour traffic, me in the passenger seat of her car. She has asked to be interviewed while making stops at stores and running errands, clearly with a lot on the go. Along with another member of the Women’s Memorial March Committee, Corinthia Kelly, Larocque attended meetings with Jill Baird and others from the Museum of Anthropology (MOA) to discuss concerns around “The Forgotten.”

Although those discussions are what led to the exhibit’s cancellation, the idea of “The Forgotten” getting pulled was actually never on the table, according to Larocque. The discussions with the MOA were about coming up with an addition to Masik’s exhibit – something from the community’s voice, represented by the Women’s Memorial March Committee on which, Larocque explains, “every community member’s seat represents hundreds of aboriginal people.”

Negotiations finally fell flat when Larocque and Kelly took their ideas for a separate exhibit, already approved by the MOA, to the Women’s Memorial March Committee for a decision.

“At that point, the community just said no. We pull out. We do not want to be involved whatsoever.” Larocque explains that the committee saw any effort to create an exhibit in connection with Masik’s work as collaboration with the artist, representing an undesirable partnership.

“So we had a meeting with Jill [Baird] downtown… and we just told her straight out: we can’t work with you anymore on this, because the community pulled out. And it was two weeks later that MOA came back and they pulled Masik.”

Larocque, of Cree background, is a fourth-year UBC Bachelor of Arts student in First Nations Studies who has volunteered with the Women’s Memorial March Committee for over five years. She has been involved with advocacy work for several other organizations as well – including developing and running her own “Indigenous Women’s Day” to recognize aboriginal women in the Downtown Eastside who have made positive transitions in their lives.

Larocque is also an artist, having debuted a widely recognized work in 2005 called the Aboriginal Angel Doll project in Vancouver – the creation of one hundred faceless cloth dolls to represent aboriginal women. She chose not to give the dolls a face to send the message that aboriginal women are made faceless by society, and that society creates the conditions that can lead to struggles like those faced by the missing women.

“What she [Masik] did was take aboriginal women’s images, and that’s what offended me the most - she now owns them, so it’s this whole idea of ownership. To me, I cannot personally own someone’s face, and she owned all of those women’s faces.”

See more
With "The Forgotten," MOA sought to open conversation about murdered and missing women
When an outsider paints the DTES missing women

With "The Forgotten," MOA sought to open conversation about murdered and missing women