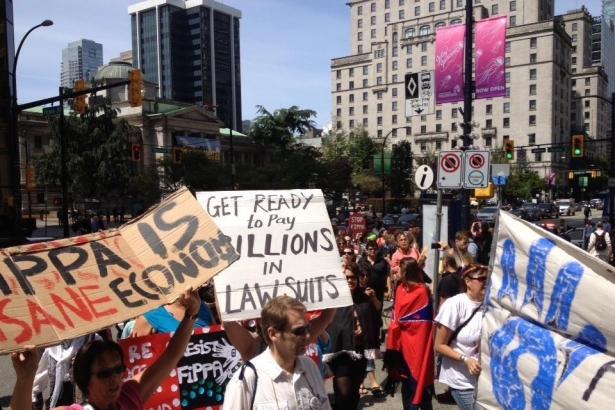 Closing arguments began Wednesday for the historic Hupacasath First Nation court challenge of a FIPA, or foreign investor protection agreement between Canada and China. The Hupacasath's case against the Harper government says that Canada has a duty to consult First Nations before entering into international treaties. “Currently, there is nothing in there that recognizes First Nations rights and title,”  Brenda Sayers, a Hupacasath First Nations representative who has been leading the charge against FIPA.

Sayers says the goal of the proceedings is to acknowledge this duty.

“So that's first and foremost. If we're going to sign an international treaty, there should be recognition of Aboriginal rights and title.”

During the noon-day recess, the HFN rallied in front of the Federal Courthouse, surrounded by over 150 supporters from across the country – including members of Leadnow, Avaaz, and the Council of Canadians, as well as dozens of First Nations groups, some from as far away as Yellowknife.

When Rueben George of the Tsleil-Waututh First Nation addressed the crowd, he contextualized the Hupacasath case as part of what has been referred to as the “Thin Red Line,” or the “last layer of protection against the destruction of our natural resources by multinational corporations.”

“The Harper government will not protect the environment or future generations,” George said. “But I will stand with you, my relations, and we will.”

George's sentiments were echoed by Grand Chief Stewart Phillip, President of the Union of BC Indian Chiefs, who framed the Canada-China FIPA as a central battle in a larger fight.

“Northern Gateway, Kitimat, the New Prosperity Mine, the industrialization of fish farming, tanker traffic, fracking... This is the same fight.”

“We'll march in the streets, we'll take to the roads and rail lines,” Phillip said to the cheering crowd. “We'll do whatever it takes to stop this government agenda.”

The Canada-China FIPA has been contentious ever since Prime Minister Harper signed it in September of last year.

Critics like NDP MP Don Davies have said that FIPA "puts legislative efforts to protect our land, air and water at risk of being struck down by corporate lawsuits.”

Gus Van Harten, an international investment law professor at Osgoode Hall Law School, and one of the experts cited by Hupacasath's legal council, asserted in an interview that the investor-state arbitration mechanisms underpinning FIPAs “tend heavily to side with investors.”

Canada holds FIPAs with 14 countries, and is in talks to establish a dozen more. But the Canada-China FIPA is the first to position Canada as a capital-importer rather than a capital-exporter country.

“The Canada-China FIPA is unique from a Canadian point of view,” says Van Harten. “We are assuming the bulk of the risks and the liabilities and the constraints.”

Takeovers of Canadian oil and gas companies by Chinese corporations like Sinopec has increased anxiety about the Canada-China FIPA, as well as its implications for the future of resource development, environmental protection and First Nations self-government.

But the case has taken on broader implications. After a failed NDP bid to halt the Canada-China FIPA in April, the Hupacasath court case is the last thing standing between the Harper government and the ratification of the treaty.

Arguments for the Hupacasath court challenge will end Friday, and Chief Justice Paul S. Crampton is expected to rule on the case in a month's time.

See more
Deep pocket PR vs. artist Franke James: the fight's on
Getting on the bus with pro-lifers and "March for Life" at BC's Parliament