James has been blogging and uploading documents to her website since her tour was cancelled. She said she is determined to continue creating art, and is scheduled to self-publish a collection of visual essays in September. One of them is "What Is Harper Afraid Of?" and "Fat Cat Canada's Giant Litter Box,"  the essay cited by Ambassador Heatherington in his email to foreign embassy staffers. 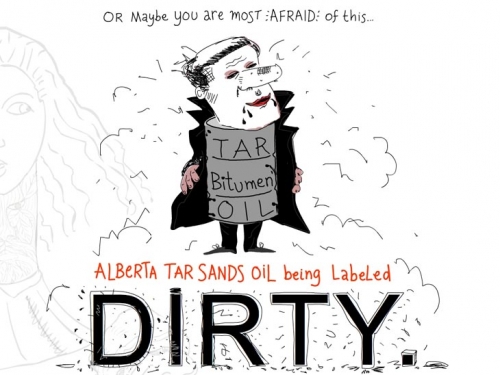 One of the illustrations from the visual essay "What is Harper Afraid Of?" Courtesy of FrankeJames.com.

She is also waiting for more documents from access to information requests, to uncover as much as possible about who was involved in the discussion of her art, and why.

"Their desire to squelch any "dirty oil" message which could influence European policymakers (the fuel quality directive is being debated in Europe) overrides their concerns for free speech for Canadians," she wrote in an email. "Dissenting voices like mine are censored."

With files contributed by Gisela Gómez.