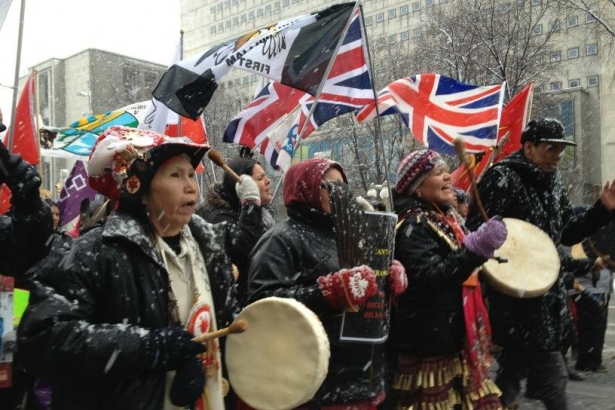 One of the first questions that people ask about the Idle No More movement is what the movement is all about. While the historical injustices experienced by First Nations are too many to list, some activists say the current government is pushing through a range of new bills that violate treaty rights. Despite the fact that some bills received input from Aboriginal representatives, opponents argue that the changes are too broad and lack support.

"Never in history has there been so many bills regarding and impacting First Nations been pushed through the House of Commons at one time," an Idle No More document released by activists reads. Below is an excerpt adapted from the document, outlining the eight bills and amendments which have sparked protests across the country.

• Does not recognize any First Nation by-laws that already set out matrimonial property laws
• Legal rights can be given to non-Indians over holds on lands on-reserve
• Land, protected under treaties, exclusively for First Nations, can be given and transferred to non-First Nation people through this bill

• Federal authorities with hand jurisdiction to the Province – not just stepping away from treaty obligations, but also funding obligations

Bill S-212: An Act to Amend the Interpretation Act

• Non-Derogation of Aboriginal and Treaty rights

• The 1887 Dawes Act (United States) in Canadian form (privatization of reserve land: will take community-held reserve lands and divide up into individual parcels)

• This land can be sold to non-Indians and corporations, like any provincial lands, under provincial laws and registries, with no Aboriginal or Treaty rights associated anymore
• After the Dawes Act, more amendments were set to go and over half of the privatized lands were given to government, military, and corporations for resource extraction
• To put a pipeline (e.g. proposed Enbridge Northern Gateway pipeline) through a community, the community’s consent is no longer needed on the same level as in the past: just the individual people whose property the pipeline would go beneath

Bill C-27: First Nations Financial Transparency Act
• This bill will force First Nations to open up all the books, source revenue, and business revenue (for the public)
• Failure to make business information public can result in being taken to court and having funds to the community cut off
• Currently, if leaders speak up, they risk having budgets slashed
• The average salary for a First Nation leader is $36,845, while the salary of the average Canadian is $46,345

Bill S-207 An Act to amend the Interpretation Act: Non-
Derogation of Aboriginal and Treaty Rights are not only violations to treaties, but are also in direct violation of Article 18, 19 &20 of the United Nations Declaration on the Rights of Indigenous Peoples (UNDRIP).

#Attawapiskat housing crisis heats up, from Parliament Hill to Twitter